Please ensure Javascript is enabled for purposes of website accessibility
Log In Help Join The Motley Fool
Free Article Join Over 1 Million Premium Members And Get More In-Depth Stock Guidance and Research
By Maurie Backman – May 14, 2020 at 5:08AM

The pandemic has made an already precarious financial outlook even worse.

Millions of seniors depend on the income they receive from Social Security to pay the bills in retirement. In fact, without those benefits, a large number of seniors would virtually be living in poverty. This is why Social Security's long-term solvency is so important.

However, the latest Trustees Report released in April reveals that the program isn't in great shape. Throw in the impact of the COVID-19 crisis, and you have a recipe for potential disaster.

Social Security is facing a serious shortfall in the coming years because it's estimated that it will owe more in benefits than it collects in revenue. Why so? Social Security gets the bulk of its funding from payroll taxes. Right now, workers are taxed on up to $137,700 of income, and that cap tends to climb from year to year. 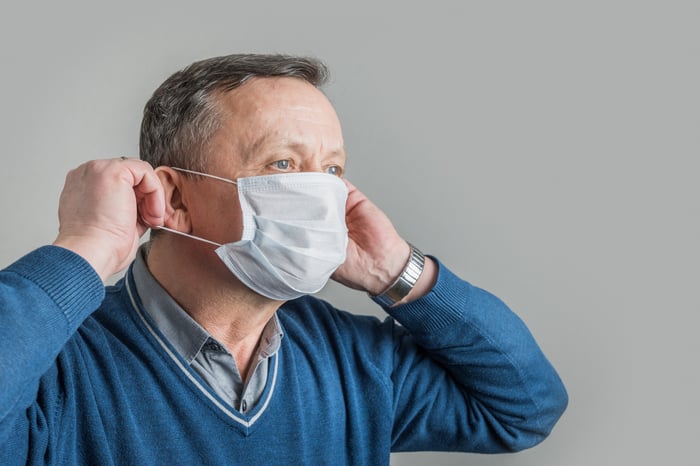 The problem is that in the coming years, a large number of baby boomers will be exiting the workforce. Once that happens, those same people won't be earning wages that are subject to a Social Security tax, but instead, they'll be collecting benefits, which chips away at Social Security's resources. Although new employees will be entering the workforce to replace them, there will still be a gap between scheduled benefits and incoming revenue for Social Security.

The good news is that Social Security has a savings account of sorts to dip into for times when its financial obligations exceed its incoming revenue. That income source is known as its trust funds. But those funds are expected to run dry in 2035, and at that point, Social Security may need to start cutting benefits to make up for the revenue shortfall its Trustees are projecting.

A problem made worse by COVID-19

What does any of the above have to do with COVID-19? Right now, U.S. unemployment is at an all-time high, and the more people who are out of work, the less payroll tax Social Security takes in. So far, COVID-19 has only been impacting the economy for about two months. But we don't know how long it will take for the economy to fully reopen and for jobs to once again become plentiful.

If the widespread shutdown continues, and today's unemployment levels hold steady or worsen, Social Security could have a real funding problem on its hands.

Is all really lost?

Thankfully, Social Security is not in danger of running out of money completely, and to be clear, its financial problems existed long before anyone had even heard of COVID-19. Still, the crisis may ultimately push up the date at which Social Security is forced to slash benefits universally.

However, lawmakers are invested in avoiding that scenario, whether it happens in 2035 or at another point in time. In fact, there are several solutions being tossed around designed to save seniors from seeing their benefits cut. One proposal is to raise the wage cap on Social Security taxes to a figure much higher than $137,700. Others want to see that wage cap eliminated entirely. There's also the thought of raising full retirement age, or the age at which seniors are entitled to their full monthly benefit based on their earnings history.

Either way, it's pretty clear that while COVID-19 won't destroy Social Security, it could make its already shaky finances even worse. And that's not the sort of news seniors want to hear right now. Those who are still working can try to pad their retirement savings so they're less reliant on Social Security once their time in the workforce comes to an end, but current seniors really need lawmakers to step in and prevent cuts -- before millions wind up in truly dire financial straits.