Please ensure Javascript is enabled for purposes of website accessibility
Log In Help Join The Motley Fool
Free Article Join Over 1 Million Premium Members And Get More In-Depth Stock Guidance and Research
By Maurie Backman - May 19, 2020 at 5:04AM

Some people agonize over when to claim benefits. This Fool is doing none of that, and here's why.

Search the internet, and you'll see plenty of articles written by personal finance experts explaining why they plan to claim Social Security at a certain age. It's always helpful to understand different people's reasoning for filing for benefits at different points, since you essentially get an eight-year window to sign up.

However, you're allowed to claim Social Security well ahead of FRA -- as early as age 62. The upside of doing so? You get your money sooner. The downside? You shrink your benefits. Specifically, someone with an FRA of 67 who claims Social Security at 62 will wind up with 30% less income per month during retirement. 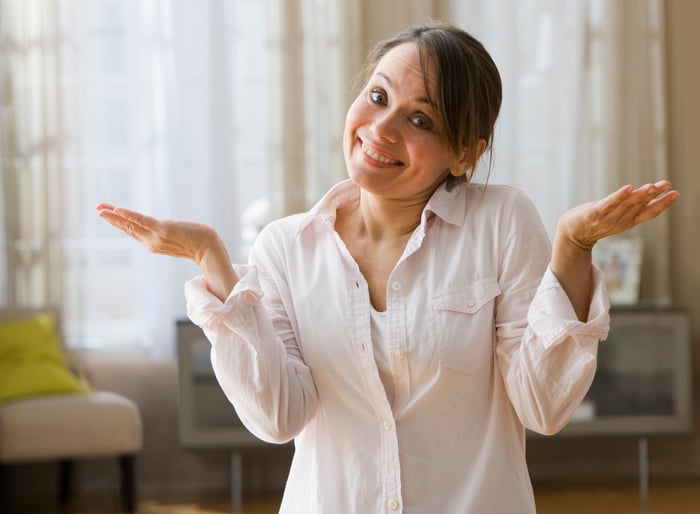 On the flipside, it's possible to delay Social Security past FRA and boost those benefits in the process. For each year you hold off, you'll increase your benefits by 8%, up until age 70, at which point that incentive runs out. Someone with an FRA of 67 who claims benefits at 70 will get 24% more by virtue of waiting.

Technically, you don't have to file for Social Security once you reach 70. But there's also no financial incentive to delay your filing past that point, which is why 70 is generally considered the latest age to sign up for benefits.

Now there are some people out there who intend to claim Social Security as soon as they can -- at age 62. Others may plan to wait until 70 to snag the highest possible monthly benefit. But frankly, I have no idea what age I'd like to claim my benefits at, nor do I really care to put much thought into that decision. The reason? I'm hoping those benefits play a very minor role in my retirement finances.

People who don't save a lot for retirement wind up depending heavily on Social Security once their careers come to an end. But in reality, those benefits will only replace about 40% of your pre-retirement wages, and that's if you're an average earner. If you're an above-average earner, they'll replace an even smaller percentage.

Furthermore, according to the latest Social Security Trustees Report, future recipients are looking at serious benefit cuts when the program's trust funds run out of money. Those cuts could wind up happening as early as 2035 -- maybe even sooner, if things get worse. As such, I have to assume that Social Security will replace a lot less than 40% of my current earnings. I also know that I'll probably need the equivalent of 70% to 80% of what I make now if I want the option to enjoy the type of retirement I'm currently envisioning. That means the bulk of my income during my senior years will have to come from my savings, not Social Security.

And that's why I'm not expending mental energy trying to figure out what age to claim benefits at. Instead, I'm focused on trying to sock away as much money for retirement as I can.

Since I'm self-employed, I have the option to save for the future in a solo 401(k), which comes with a much higher annual contribution limit than the 401(k)s you'll see sponsored by employers. My goal is to max out each year I can, all the while investing my retirement savings heavily in stocks for maximum growth. Because I'm decades away from retirement age, that strategy works right now, though as that milestone nears, I plan to shift some of my assets into safer investments to minimize my risk.

Of course, saving for retirement on a variable income like mine isn't easy, but I prioritize those solo 401(k) contributions by making them automatic. Before I'm able to spend any of my earnings, a portion of my income leaves my checking account and lands in my retirement plan, thereby eliminating the temptation to skip out on savings one month to take a vacation, or to skip another's month contribution to pay for a home improvement project. I also try my best to live well below my means so that I'm able to dedicate a substantial percentage of my income to my retirement plan.

How much cash might I retire with? It's almost impossible to predict that. But if you're sitting there thinking you may be ready to focus more on retirement savings, here are some numbers to consider. If you're 37 years old with the goal of retiring at 67, you manage to sock away $600 a month over the next 30 years, and your retirement plan generates an average annual 7% return during that time (which is a few percentage points below the stock market's average), you'll wind up with about $680,000. Make it $800 a month, and you're looking at around $907,000. And if you're able to set aside $1,000 a month over the next three decades at an average yearly 7% return, you'll be sitting on a cool $1.13 million.

To be clear, I'm not writing off Social Security completely in the course of my retirement planning. I do expect those benefits to provide some amount of income, though right now, between my age and the program's shaky future, it's hard to estimate what they'll amount to. But one thing I am doing is working hard to ensure that Social Security ultimately doesn't matter that much to me once I close out my career. By making sacrifices today, I'm setting myself up to care less about what happens with those benefits, which is why I'm not making the slightest effort to strategize about when to claim them.