Please ensure Javascript is enabled for purposes of website accessibility
Log In Help Join The Motley Fool
Free Article Join Over 1 Million Premium Members And Get More In-Depth Stock Guidance and Research
By Christy Bieber – Jun 25, 2020 at 11:38AM

Running short of money is the biggest fear of many retirees. Unfortunately, it can happen sooner than you think. In fact, according to the Consumer Financial Protection Bureau, only 51% of retirees who left work between 1992 and 2014 had enough income to maintain the same spending level for five consecutive years.

Sadly, for those retirees who ran short after just half a decade, big spending cuts quickly became necessary. In fact, those who couldn't continue to spend at the same level ended up reducing their expenses by 28% by their sixth year of retirement compared to their expenditures in year one.

Having to reduce your outflows by more than one-fourth so soon after leaving work can have a major impact on your quality of life. The good news is that there are two key things you can do if you're still working or newly retired so you can make sure this doesn't happen to you. 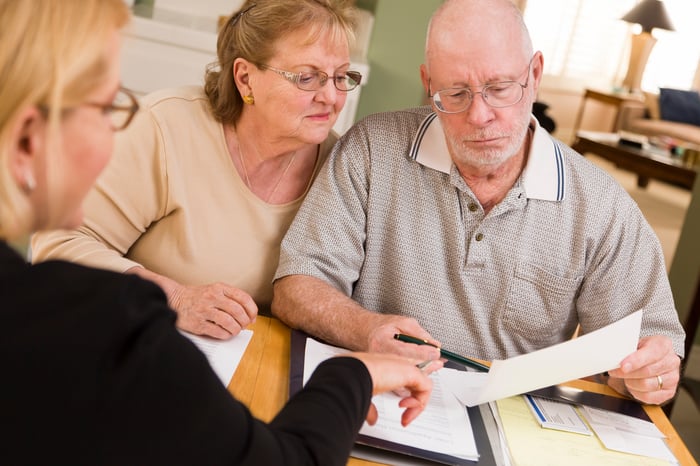 When you set your retirement savings goals, don't aim to save the minimum you'd need to survive. Instead plan for your investments to produce enough income to maintain your preretirement standard of living, and don't forget to factor in inflation, taxes, and healthcare expenses.

Yes, this will mean you're setting a much bigger target for yourself, and it will require saving more of your income. But the reality is that you'll have to make sacrifices either now or in your retirement years. It's better to choose to do it now, on your own terms, than to be forced into it later.

If you don't have a plan for how much you can safely withdraw from your retirement accounts, you may find yourself taking too much out to support your lifestyle. Unfortunately, if your investment account balance falls too fast, it won't be able to produce what you need to maintain your living standard later.

To make sure that doesn't happen, come up with a plan before taking any money out, and stick to it. Experts used to advise following the 4% rule, but that puts you at risk of running out of money. Instead, consider choosing your safe withdrawal rate using a different approach related to required minimum distribution settings determined by the IRS.

Social Security benefits won't ever run out for your lifetime, and they're protected against inflation, so maximizing them makes sense if you're worried you'll run short of money.

By working at least 35 years and waiting to claim benefits to avoid early filing penalties and earn delayed retirement credits, you should be able to boost your income later in life. And the more you have coming in from Social Security, the less you'll need from other sources to maintain your standard of living.

Don't let your quality of life decline as a retiree

If you don't want to find yourself forced to reduce expenses just a short time after retirement, saving as much as possible throughout your working life and controlling your spending early on are both important, as is making the most of your Social Security benefit.

While taking these steps can require sacrifice, it's much better to take action to keep your spending reasonable before you're forced to do so because you're running short of cash.