Please ensure Javascript is enabled for purposes of website accessibility
Log In Help Join The Motley Fool
Free Article Join Over 1 Million Premium Members And Get More In-Depth Stock Guidance and Research
By Maurie Backman – Jun 26, 2020 at 7:36AM

Though the pandemic has robbed Social Security of essential income these past few months, it's ultimately not to blame for the crisis the program has landed in.

The economic impact of COVID-19 has been extreme since cases started multiplying domestically in March. Not only has the pandemic shuttered over 100,000 small businesses and sent unemployment levels spiking, but it's already impacted one key social program that millions of seniors rely on today and millions more will rely on in the future.

We're talking about Social Security, and it's hard to gloss over the damage COVID-19 has done to it. Over the past three months, high unemployment has deprived Social Security of much of its primary revenue stream -- payroll taxes.

Currently, wages of up to $137,700 per year are subject to Social Security taxes, whereas unemployment benefits are not. The problem is that somewhere in the ballpark of 40 million workers have lost their jobs in the course of the pandemic, and those people and their employers haven't been liable for the payroll taxes that keep Social Security afloat. And if the recession we're currently in continues well into 2021, Social Security's financial situation could go from "bad" to "dire." 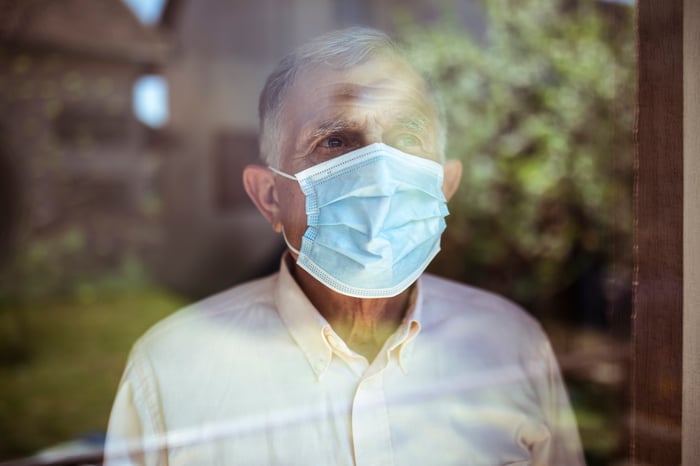 While it's easy to blame COVID-19 for Social Security's fiscal problems, the reality is that they existed well before the pandemic started. And even if the economy springs back quickly, it likely won't be enough to save Social Security from a shortfall later on.

Social Security's Trustees have sounded a warning for years that the program is in trouble. In the coming decade, Social Security expects to owe more money in benefits than it collects in revenue. That's not a symptom of COVID-19 -- it has to do with the fact that baby boomers will be exiting the workforce in short order and starting to claim benefits, while the number of younger workers coming in to replace them will be inadequate.

The good news is that Social Security has trust funds it can tap when its financial obligations exceed its revenue. The bad news is that those trust funds aren't unlimited, and once they run dry, benefit cuts may be on the table.

In April, the Social Security Trustees projected that those very trust funds will be out of money by 2035, and it is fair to say that the COVID-19 crisis could wind up causing that unwanted milestone to arrive even sooner. But ultimately, the pandemic isn't to blame for the fact that Social Security recipients may be in line for benefit cuts. Rather, that's on lawmakers who have yet to come up with a viable solution to address the program's financial woes.

Can Social Security be fixed?

There are a number of proposals lawmakers have been floating that attempt to save Social Security from insolvency. A common one is raising the full retirement age, or the age at which seniors can collect their monthly benefits in full. Another popular suggestion is to raise or even eliminate the $137,700 wage cap associated with Social Security taxes. (To be clear, that specific number changes from year to year, and $137,700 represents the threshold for Social Security taxes in 2020). And then there are those who think Social Security should only be paid out to seniors who need it, and wealthier retirees should get a lower benefit or no benefit at all.

Clearly, there's work to be done in preventing benefit cuts in the not-so-distant future. And the COVID-19 crisis is no excuse to put that work aside. Social Security's finances aren't getting better, and while the pandemic may have nudged things in an unfavorable direction, the program's problems existed well before the term "COVID-19" was on anybody's radar.