Social Security is an important income source for the millions of seniors who collect benefits during retirement, and while there's nothing wrong with factoring those benefits into your long-term financial plans, you shouldn't make the mistake of thinking those benefits alone will be enough to get you through your golden years. Here's why.

1. The average monthly benefit is probably lower than you think

Minimum wage in the U.S. is $7.25 an hour, which means that if you work 40 hours a week, 52 weeks a year, you're taking home $15,080 in annual income -- not a whole lot. Well, it may shock you to learn that the average Social Security benefit isn't much higher. The typical senior today receives $1,503 a month in benefits. On an annual basis, that's $18,036. Granted, that still counts as being above the poverty line -- but it doesn't negate the fact that it's not a lot of money to live on, especially if you're used to earning a lot more than minimum wage. 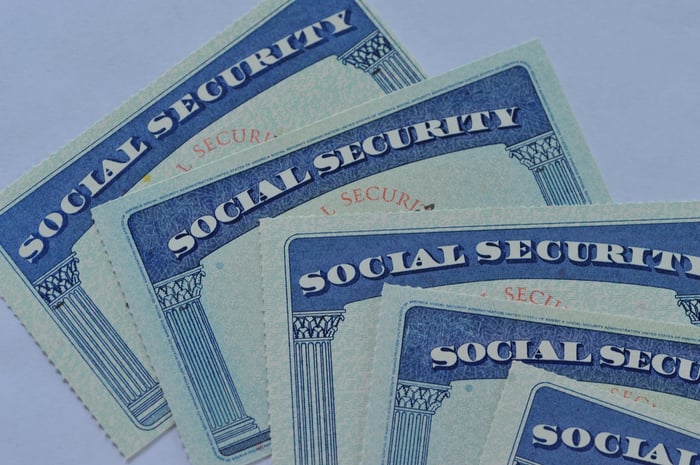 2. Benefits may be cut in the future

Social Security is facing a major financial crisis in the not-so-distant future. In the coming years, the program will owe more money in benefits than it expects to collect in payroll tax revenue as baby boomers exit the workforce in short order and not enough younger workers come in to take their place. In that scenario, Social Security can tap its trust funds to make up for a revenue shortfall, but only as long as those funds actually have money in them.

According to the Social Security Trustees' most recent projections, the program's trust funds are set to run dry in 2035, and unfortunately, high levels of unemployment during the COVID-19 pandemic that have robbed Social Security of precious payroll tax revenue could make that unwanted milestone arrive even sooner. Once that happens, benefits could be slashed by more than 20%.

3. You may be forced to retire before you're eligible to claim benefits

An estimated 48% of workers are forced to end their careers early, according to the Employee Benefit Research Institute. And that alone is a good reason not to bank solely on Social Security. Though you're only entitled to your full monthly benefit based on your earnings history once you reach full retirement age (which is either 66, 67, or somewhere in between, depending on the year you were born), you're allowed to start collecting Social Security beginning at age 62, albeit at a reduced rate. But what happens if you're forced into retirement at age 60, or even earlier? Without an additional income source, what will you do then?

All of the above points boil down to one important message: It's crucial that you save for retirement independently rather than assume that Social Security will provide all of the income you need for your senior years. If you're 40 years old, and you sock away $300 a month in a 401(k) or IRA between now and age 67, you'll wind up with $268,000 for retirement, assuming your investments in that account deliver an average annual 7% return (which is a reasonable assumption for a retirement plan that's invested heavily in stocks). Make it $400 a month, and you'll be sitting on $357,000.

While Social Security is, thankfully, not in danger of going bankrupt and disappearing, if you depend too heavily on those benefits, you're likely to wind disappointed and cash-strapped. And don't you deserve better?