The inability to do their jobs remotely could have serious financial and health implications for the demographic of workers most at risk from COVID-19.

Tens of millions of Americans have lost their jobs in the first few months of the COVID-19 pandemic, while countless more risk a similar fate as the nation's young recession unfolds. Factor in the massive surges in new coronavirus cases across the country that are forcing state and local officials to impose or reimpose restrictions, and it's fair to say that an economic recovery may not be in the immediate cards.

But while the current state of the economy puts all workers in a potentially precarious employment position, older workers may be more worried than others for one simple reason: Most of their jobs can't be done remotely.

In June, the Center for Retirement Research at Boston College released a report that dug into older workers' job prospects, and it found that only 44% of workers aged 55 to 64, and 47% of those 65 and over, have jobs that can be performed remotely. This means that more than half of those older workers may have trouble keeping their jobs, or returning to a job, for the duration of the pandemic. And that's problematic on many levels. 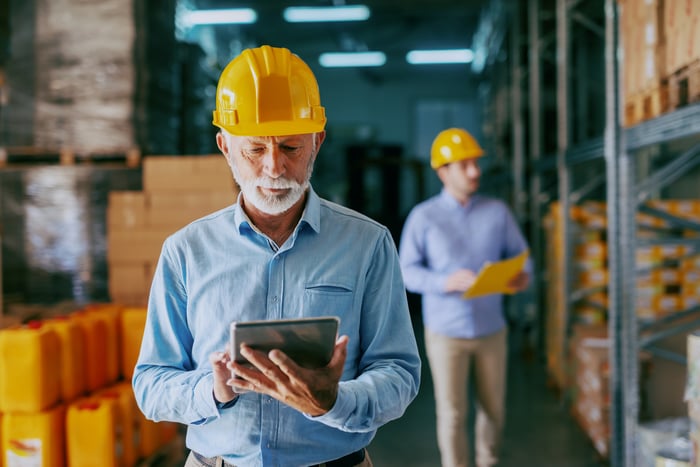 A job loss at a later age could result in a couple of unfavorable scenarios. First, those who find themselves out of work in their 50s or 60s might struggle to find another job. And a prolonged period without a paycheck is likely to cause older workers to stop making contributions to their retirement accounts during a period in their lives when many are trying to play catch-up.

Secondly, large numbers of people in this demographic who either lose their jobs or leave them due to health concerns risk getting pushed into early retirement whether they like it or not. And while an early workforce departure is a goal some people strive for, it can be catastrophic for those who don't want it and aren't prepared. Retiring sooner than planned often means going into that life stage short on savings, and can require people to tap Social Security before reaching full retirement age. Folks who go that route may be getting much-needed income, but at the cost of slashing their monthly benefits for life.

How does remote work tie into all of this? If that option were on the table for more older employees, then perhaps we'd see a lower jobless late among the 55-and-over crowd. Even in the absence of layoffs, many older Americans who continue to work are now being forced to choose between their health (and potentially, their lives) and their incomes. And that's not a good place to be.

So what should older Americans who can't work remotely do? Those in a position to take time away from the workforce, ride out the pandemic, and return to a job when it's safer would be wise to go that route. It may be possible for some older workers to take a year off and live on their savings -- both emergency and retirement. Under the CARES Act, which was passed in March to provide financial relief during the pandemic, workers are allowed to withdraw up to $100,000 from an IRA or 401(k) without penalty. (Normally, a penalty applies for withdrawals taken prior to age 59 1/2.) While raiding your retirement plan isn't a great thing to do, it probably is a much better option than retiring five to 10 years earlier than you intend to.

At the same time, older Americans who are laid off or opt out of the workforce to safeguard their health should take the opportunity to expand their skills and increase their qualifications for new positions they could do remotely. A 62-year-old warehouse manager with strong organization skills whose job requires them to be on-site could, for example, brush up on spreadsheets and data compilation, and then go looking for a job in project or inventory management that they can do from home.

Finally, older workers whose jobs are conducive to remote work should advocate for that option if their employers don't make it readily available. It's too soon to tell how things will play out as COVID-19 continues to pose a threat to Americans' safety and finances, but the last thing older people need is the stress of reporting to a workplace when the work they do doesn't actually require them to set foot in one.