Please ensure Javascript is enabled for purposes of website accessibility
Log In Help Join The Motley Fool
Free Article Join Over 1 Million Premium Members And Get More In-Depth Stock Guidance and Research
By Maurie Backman - May 2, 2021 at 4:48AM

This single factor could cause you to fall short on savings for your senior years.

Though Social Security may end up providing quite a bit of retirement income for you, it shouldn't be your only source. Those benefits will only replace about 40% of your paycheck if you're an average earner, and most seniors need about twice that income level to keep up with their expenses. As such, it's important to try to sock away a nice chunk of money for the future.

But not everyone gets an early start on retirement savings. In fact, some people deliberately hold off on funding a retirement plan until their 40s or 50s, opting to focus on other goals first, like paying off debt, buying a home, or putting their kids through college.

Here's the problem, though. While you might think you'll have an opportunity to play catch-up on the retirement savings front, the reality is that your career may get cut short on you. And that could leave you in a serious financial lurch for the rest of your life. 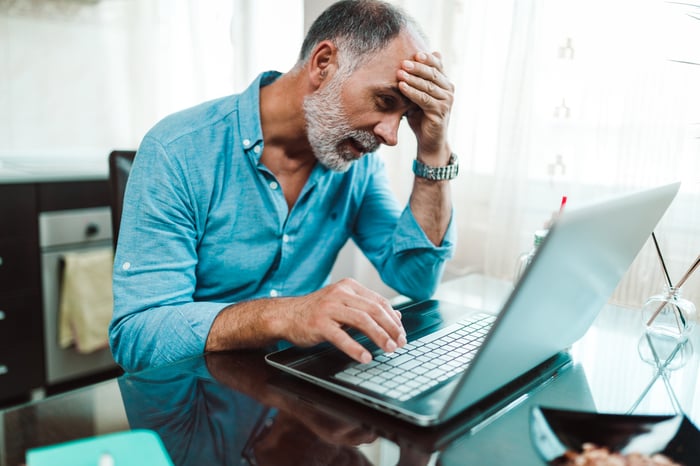 Will you end up working as long as you expect to?

Many people assume that they'll work until their mid- or late 60s, or possibly beyond. But you may not get that choice. In fact, 46% of retirees today left the workforce earlier than planned, according to a recent survey by the Employee Benefit Research Institute. And the same thing could happen to you.

You may, for example, get downsized out of a job in your early 60s and struggle to find another one. Or, a health issue could arise that prevents you from working at all. And that health issue doesn't need to be yours. If a spouse or parent of yours falls ill, you may be called upon to provide care.

Of course, some people who retire sooner than planned do so because they can afford to -- and it's an active choice. But that may not be the case in your world, so rather than delay your retirement savings, make an effort to fund your nest egg from as young an age as possible -- even if it means having to juggle other financial goals that may seem more pressing.

To illustrate the importance of saving from an early age, imagine you're able to set aside $500 a month in a retirement plan once you turn 40, with the goal of retiring at 67. If you manage to do so for 27 years and your retirement plan delivers an average annual 7% return (which is doable if you load up on stocks), you'll end up with about $447,000.

But what if you're forced to retire at 63? In that scenario, your ending retirement plan balance shrinks to about $321,000 when we factor in four years of lost investment growth plus four years without making contributions. And that would, in our example, leave you with $126,000 less for your senior years -- not a small sum.

The takeaway? You can plan for retirement as diligently as possible, but life might throw you a curveball nonetheless. Rather than assume you'll have the option to catch up on savings if you get a late start, aim to start funding a retirement plan in your 20s, 30s, or as soon as possible. That way, you won't be left scrambling if your career doesn't last as long as you expect it to.