Please ensure Javascript is enabled for purposes of website accessibility
Log In Help Join The Motley Fool
Free Article Join Over 1 Million Premium Members And Get More In-Depth Stock Guidance and Research
By Maurie Backman - May 21, 2021 at 5:36AM

More people than ever have at least $1 million in an IRA or 401(k). Here's how to get there yourself.

Many people have the goal of retiring with $1 million or more in savings. And given the expenses seniors tend to face, that's not a silly goal to set. It's also by no means an impossible one to achieve.

All told, the total number of retirement plans worth $1 million or more has more than doubled from one year ago. And that's pretty impressive given the hit the stock market took early on in the pandemic, and also given the fact that many people had to either tap their retirement savings early to cope with the coronavirus outbreak, or put their contributions on pause to focus on near-term needs, like emergency savings. 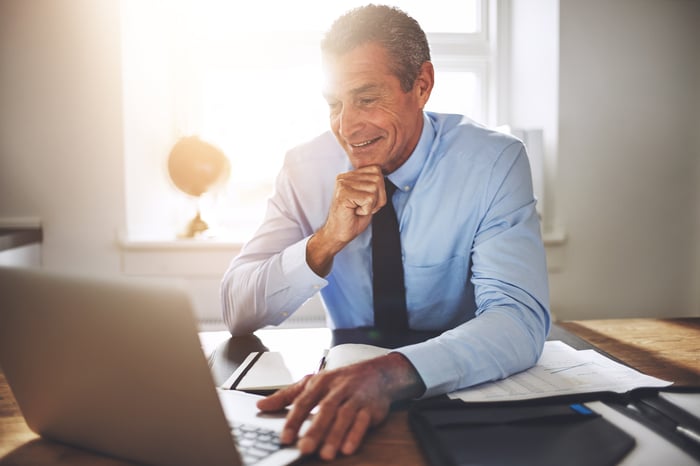 How to get your retirement plan to $1 million

If you're eager to join the ranks of those people with $1 million or more in savings, there's a simple two-step approach you should follow:

When it comes to growing wealth, time is really your greatest weapon, and if you're able to start saving for retirement as soon as your first steady paycheck starts rolling in, you'll put yourself in a strong position to accumulate a bundle of money. But for that to happen, you'll also need to invest wisely, and that's where stocks come in. Though stocks are far more volatile than bonds, they also tend to deliver much higher returns -- and they could be your ticket to reaching millionaire status in time for retirement.

Best of all, you don't need to know a whole lot about stocks to invest in them. If you're not comfortable hand-picking companies one by one, you could instead put your money into S&P 500 index funds. The S&P 500 consists of the largest publicly traded companies in the stock market, and S&P 500 index funds simply aim to match that index's performance.

Over the past 30 years, the S&P 500 has delivered an average annual return of about 11%. Even if we get more conservative and assume that your retirement plan will deliver an average annual 9% return over time, if you invest $300 a month in that plan over 40 years, you'll end up with $1.2 million. Make it $500 a month, and you'll be looking at just over $2 million.

The fact that there are now more retirement plan millionaires than ever is a good thing, and the reality is a lot of the people who have a $1 million nest egg or more aren't necessarily high earners who started off wealthy to begin with. For many of those savers, those impressive balances are the result of consistent contributions and wise investments. And if you follow in their path, you, too, could one day become a retirement plan millionaire.