Please ensure Javascript is enabled for purposes of website accessibility
Log In Help Join The Motley Fool
Free Article Join Over 1 Million Premium Members And Get More In-Depth Stock Guidance and Research
By Dan Caplinger - Jun 27, 2021 at 4:05AM

Recipients are gearing up for what could be their second-biggest raise in the past 30 years.

Tens of millions of people rely on Social Security  for vital retirement income, and many live largely on the fixed income that Social Security provides. One of the most important aspects of Social Security is that its monthly benefits are adjusted each year for inflation through annual cost of living adjustments, or COLAs.

When inflation levels are tame, as they've been for much of the past decade, Social Security COLAs tend to be small. However, price levels have moved sharply higher recently, and that's putting Social Security in a position in which the COLA that will take effect at the beginning of 2022 could be among the top increases it's given since 1990. 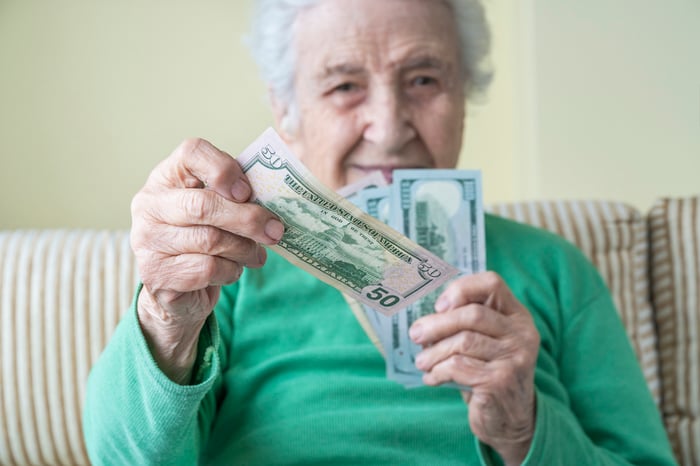 April's inflation report from the Bureau of Labor Statistics put Social Security recipients on notice that their COLA for 2022 might be something special. Yet many dismissed the hefty price increases as being purely temporary in nature.

When the report for May came out earlier this month, therefore, it came as a shock to many. Far from reversing course, prices continued to rise sharply during the month, with a headline rise of 0.6% for the benchmark Consumer Price Index (CPI) number. That brought the CPI's increase over the past 12 months to 5%, a pace not seen for more than a dozen years.

In the past, food and energy prices have often been the culprits behind inflationary pressures, but that hasn't been the case this time around. So-called core inflation, which excludes food and energy, rose at a faster 0.7% rate in May. As we saw in April, sharp increases in prices of used cars and trucks, household furnishings, airline fares, and apparel helped set the stage for heftier inflation numbers.

For purposes of determining inflation adjustments, the key figure to watch was the CPI-W inflation index. That number moved higher by 0.9% for the second straight month in May, rising to 263.612. That's 5.6% higher than it was this time last year.

To figure out the actual COLA, though, the Social Security Administration will need to look at the CPI-W figures for July, August, and September. It will then compare those numbers to the average during the same period in 2020, which was 253.412.

Anything can happen in the coming months, but if price levels don't make any moves in one direction or the other, then current levels would imply a 4% COLA for 2022. There've only been two years since 1990 that had higher COLAs than that.

There's also a significant likelihood that prices will continue to move higher. It would take a lot more upward pressure for the CPI-W to move high enough to match the 5.8% COLA that Social Security recipients got in 2008. However, with the next-highest reading coming in at 4.1% from 2005, it wouldn't take much for 2022's COLA to move into the No. 2 spot looking back more than 30 years.

Should retirees be happy?

High COLAs are a mixed blessing for Social Security recipients. To the extent that CPI increases match up with actual higher costs for retirees, the COLA won't necessarily provide greater purchasing power. Moreover, anticipated increases in Medicare premiums could take away a portion of the raise that Social Security recipients actually see in their monthly payments.

Nevertheless, more money from Social Security is always better than less. Those who live on fixed incomes will appreciate adjustments that could end up adding $60 or more to the average monthly Social Security check in 2022.