It's not for everyone, but this technique could provide intergenerational wealth.

If you've read any financial news outlet for long enough, you likely know that America is in the middle of a retirement crisis. However, the crisis isn't affecting everyone: While many seniors are understandably struggling due to an inability to save or a forced early retirement spurred by health reasons, this is simply not the experience of others.

And while Social Security is a key reason for lower poverty rates among seniors, with some estimates noting it led to a 31.7-percentage-point reduction in poverty in elderly populations, another study found that most seniors were able to maintain or increase their spendable income after claiming Social Security. For many seniors, the Golden Years are truly golden! 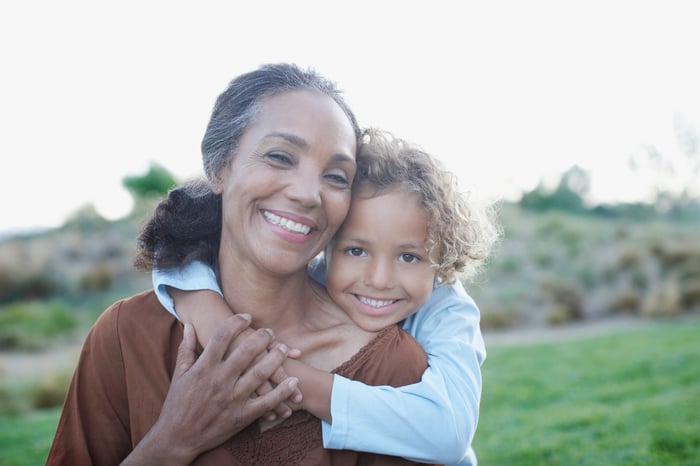 Count my mother among the group of seniors whose fortunes have improved. We lived in what could be favorably considered a lower-middle income household, with her being a single parent for the bulk of my childhood with little external support. Understandably, my mom was forced to work multiple jobs, and could spend little on herself.

The strong work ethic forced on her continues to this very day: She still works at her full-time job despite being at full Social Security age because she likes "staying busy." When she does retire, she will receive a pension from her employer and be one of the seniors above able to increase her spendable income.

Her situation has changed, but her thrifty mindset has not. Now that she's found herself with extra spending money, she has decided to gift a portion to her grandson (my son) by contributing to his Uniform Transfers to Minors Act (UTMA) account.

Perhaps I'm biased, but I believe it's the smartest move she could make with her Social Security check.

Three reasons why gifting is smart

There are a few reasons to gift money to your grandchildren:

For comparison, the chart below allows you to easily calculate the value of an investment today based on expected annualized returns and years invested. For simplicity's sake, I used common milestones in a person's life as age references.

To see the wonder of compounding, simply multiply the figures inside the box by the principal amount of the prospective gift. For example, a single dollar invested with a 35-year-return of 10% annualized would grow to be $28.10. Therefore, our son's UTMA account of $20,000 growing under the same conditions would be worth (20,000 x 28.10) = $562,000 -- pre-tax. Even modest 6% annual returns will create a nest egg of $154,000 with no further contributions (though my wife and I do contribute monthly). Our son would be nearly 40 at that time, and even the lower amount stacks up favorably to what the average 40-year old currently has saved.

Author's Calculations. Note: These figures are not returns, they are total value calculations, as they include the initial principal.

Admittedly, the figures above don't include taxes or fees, but we're attempting to limit both by avoiding actively managed mutual funds or excessive trading. In fact, we're investing my son's UTMA across three low-fee broad-based ETFs.

It's important to note this strategy isn't for everyone. Seniors facing retirement shortfalls would be better off using their Social Security money to fund their own retirement.

Other seniors are wary of the limited nature of UTMA accounts and want to establish other wealth transfer vehicles like trusts. Finally, there are individuals that want to leave wealth to charities or other organizations instead of their families.

That said, your grandchildren have the greatest asset in investing -- time -- and a small gift now could make them a fortune in the years ahead. It's a smart move, but as a grandparent, you already know that.