Please ensure Javascript is enabled for purposes of website accessibility
Log In Help Join The Motley Fool
Free Article Join Over 1 Million Premium Members And Get More In-Depth Stock Guidance and Research
By Dan Caplinger – Aug 21, 2021 at 5:05AM

It seems as though inflationary pressures are anything but transitory.

Tens of millions of Americans count on Social Security to help them make ends meet in retirement. Something Social Security offers that just about no other income source can match is an annual cost-of-living adjustment (COLA) that increases benefit checks to account for the effect of inflation on rising prices.

Social Security recipients have gotten used to getting next to nothing in annual raises, with most years featuring COLAs of 0% to 2% over the past decade. However, inflation has perked up in 2021, and if price increases continue, they could lead to the biggest boost in Social Security benefits in nearly 40 years.

Inflation seems to be unstoppable

After having been subdued for years, inflation started to rise sharply beginning in March. A 0.6% rise for the Consumer Price Index seemed like a one-off blip, but then, the Bureau of Labor Statistics reported a 0.8% rise in prices for April. May's 0.6% and June's 0.9% rise didn't allay any fears, especially as it pushed year-over-year price increases above the 5% mark and suggested that the price hikes could be long-lasting. 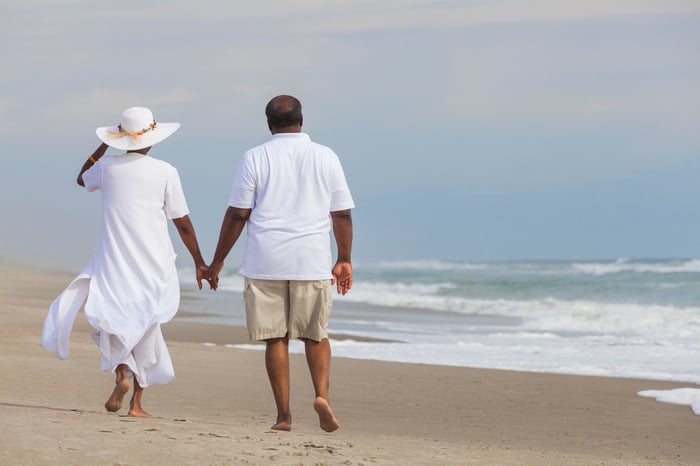 Earlier this month, CPI numbers for July eased up a bit, but they still remained elevated compared to historical norms. A 0.5% rise for  the month kept the 12-month price change at 5.4%, which matched the worst level since 2008. The good news was that price hikes on some items that had contributed the most to recent inflationary pressures, such as new and used cars and trucks, airfares, and other transportation services, eased back.

However, there were still troubling trends. Energy prices spiked higher by 1.6%, and food costs rose 0.7%. Hotel prices surged 6% higher after a 7% rise in June. More broadly, recreational costs saw a big gain as people sought to make up for lost time during the worst of the COVID-19 pandemic.

The measure of inflation for calculating Social Security COLAs, the CPI-W, matched the headline number's 0.5% rise, coming in at 267.789. That's up 6% from where it was a year ago.

July's CPI-W will be one of three numbers that goes into the three-month average to calculate the COLA that will take effect in January 2022. At the end of the three-month period, the average figure will get compared to last year's corresponding figure of 253.412.

Meanwhile, even a modest increase would make 6% a reality for people on Social Security. To get an average CPI-W high enough to warrant a 6% COLA, inflation levels would have to rise at about a 0.3% monthly pace in both August and September. That's far from certain given the potential for some prices to pull back sharply after their big gains. However, it also looks far more likely than it did just a few short months ago.

Should you actually hope for a smaller COLA?

Everyone likes to get more income, but when the reason is that prices are on the rise, it's not necessarily a net win. Social Security's COLAs were designed not to provide a windfall for seniors, but rather simply to help them keep up with loss of purchasing power. That's something Social Security recipients who are fortunate enough to have other financial resources, such as savings, will have to deal with on their own.

With central bankers stubbornly asserting that inflation will be transitory, it's unclear whether future monetary policy moves will get recent price increases under control. Over the next two months, though, Social Security recipients will anxiously await news of whether they'll get big enough increases in their monthly checks to get by on their fixed incomes.