Your 401(k) could be your ticket to years of financial security -- if you don't make these blunders.

Saving money in a 401(k) plan is one of the smartest things you can do to secure your retirement. But it's important to manage that account carefully. And if you wind up making these mistakes, you could end up sorely regretting them later in life.

1. Not snagging your full employer match

Not all 401(k) plans come with a company match -- but many do. And if you're not contributing enough money out of your paychecks to claim that match in full, you're doing your future self a major disservice.

When you give up an employer match, you forgo free money. But it's not just that you'll lose out on those principal contributions, you'll also lose out on the chance to grow those matching dollars into a larger sum. 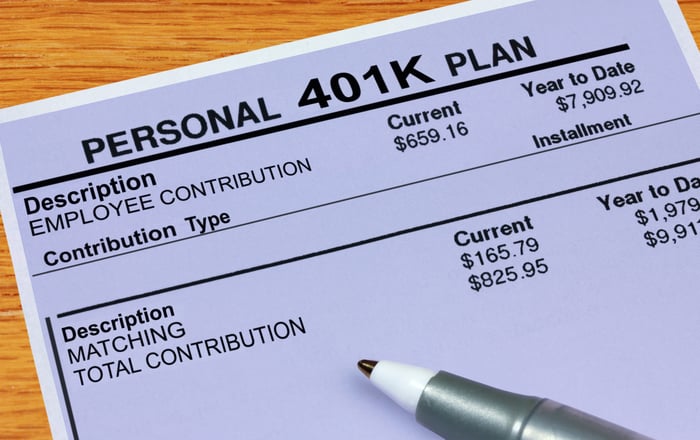 Imagine you're able to snag $3,000 a year in employer matching dollars, but you pass that opportunity up over a 10-year period between the ages of 30 and 40. At that point, you'll have lost out on $30,000. But actually, it gets worse than that.

That's why it's a good idea to contribute enough money to claim your full 401(k) match. It could end up making a big difference in the long run.

When you first sign up for a 401(k), you'll generally be put into your plan's default savings option until you go in and choose your own investment. Most of the time, that default option will be a target-date fund, which is designed to adjust your investment mix as you get closer to meeting certain milestones, like retirement. But they can be problematic for two reasons.

First, some target-date funds invest too conservatively. That could leave you with lower returns in your 401(k) and less money on hand during retirement.

Secondly, target-date funds can charge high fees that eat away at your returns. Opting for index funds in your 401(k) is a good way to potentially snag more favorable returns, and also, to keep your fees to a minimum.

These days, more and more 401(k)s are offering a Roth savings option. And it could pay for you to take advantage of it.

With a Roth 401(k), you don't get an immediate tax break on your contributions as you would with a traditional 401(k). But what you get instead is tax-free growth in your account and tax-free withdrawals in retirement.

The result? Fewer financial worries later in life, when money may end up being tighter.

If you're participating in a 401(k) plan, you're already taking an important step toward prioritizing your retirement. Just make sure to avoid these mistakes along the way.