Please ensure Javascript is enabled for purposes of website accessibility
Log In Help Join The Motley Fool
Free Article Join Over 1 Million Premium Members And Get More In-Depth Stock Guidance and Research
By Maurie Backman – Oct 10, 2021 at 5:01AM

Stimulus checks were a lifeline for Americans during the pandemic. Could more aid for seniors be on the way?

Back in March, many people enjoyed a $1,400 stimulus check thanks to the American Rescue Plan. But at this point, the likelihood of there being a fourth stimulus check in the near term is low. That's because the economy has improved tremendously over the past six months, and right now, it's harder to make the case for widespread aid.

But some advocates insist that while the general public may not need another stimulus, seniors on Social Security should be an exception. In fact, the nonpartisan Senior Citizens League is calling on lawmakers to send Social Security recipients another round of $1,400 checks. 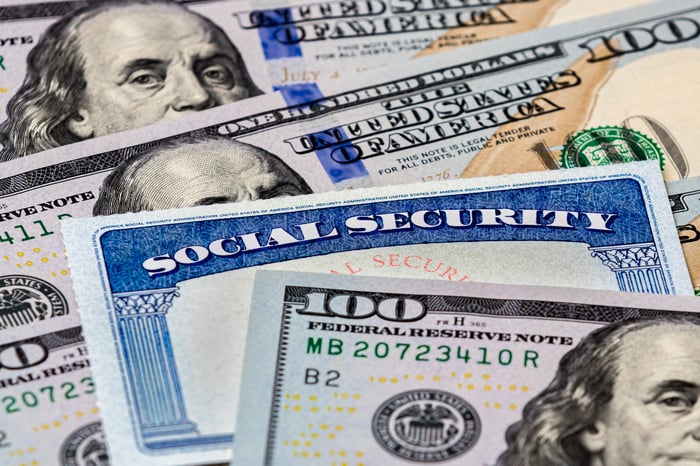 As of now, we don't know how large a raise (known as a cost-of-living adjustment, or COLA) seniors will be getting in 2022. The reason is that annual COLAs are calculated based on third-quarter data from the Consumer Price Index for Urban Wage Earners and Clerical Workers (CPI-W).

Currently, we only have CPI-W data from July and August. And until September's number comes in, that COLA can't be determined.

But seniors should get the official word on their 2020 COLA shortly. And no matter how it shakes out, it's looking like Social Security recipients will be getting their largest raise in decades.

In fact, based on the data we already have from the CPI-W, experts are projecting that next year's COLA will come to at least 6%. By contrast, going into 2021, seniors saw their benefits rise by just 1.3%.

But in spite of the generous COLA that's anticipated for 2022, the Senior Citizens League insists that Social Security beneficiaries need help maintaining their buying power. For years, Social Security's COLAs have done a poor job of keeping up with inflation. And even if a giant raise comes in next year, the reason behind it will boil down to extreme increases in the cost of consumer goods that have impacted seniors and workers alike.

Or, to put it another way, even if seniors get a large raise for 2022, they're unlikely to wind up coming out ahead financially because the general cost of living has increased so much. And so giving Social Security beneficiaries their own stimulus check could mean actually allowing their buying power to increase.

Will lawmakers get on board?

Whether lawmakers agree to a senior-specific stimulus check is yet to be determined. But it's clear that seniors who get the bulk of their income from Social Security have struggled for years, and that could continue even if 2022's raise is as generous as experts are thinking it'll be.

Let's remember that Medicare Part B premium hikes will also be the wild card seniors will have to grapple with in conjunction with that raise. If Part B costs go up enough, that alone will erode whatever benefit seniors might glean from higher Social Security paychecks.

Will the process of calculating COLAs change?

The viability of a near-term senior-specific stimulus check may be dubious. However, one change that could come down the pike is a shift in the way COLAs are calculated.

For years, senior advocates have called upon lawmakers to use the Consumer Price Index for the Elderly (CPI-E) as the basis for calculating COLAs. The logic is that this index more accurately represents the costs seniors face.

Swapping the CPI-W for the CPI-E could result in higher COLAs down the line, which could, in turn, give seniors more buying power. And while that doesn't have the same ring as a fourth stimulus check, it could be a lifeline nonetheless.