Please ensure Javascript is enabled for purposes of website accessibility
Log In Help Join The Motley Fool
Free Article Join Over 1 Million Premium Members And Get More In-Depth Stock Guidance and Research
By Matthew Frankel, CFP® - Dec 20, 2015 at 7:18AM

According to the statistics, Americans are doing a poor job of saving for retirement, while expenses are skyrocketing. Here's what you need to know, and what to do about it.

Saving for retirement is a topic that frightens many Americans -- and for good reason. After all, the Center for Retirement Research found that more than half of all working households are at risk of being unable to keep up their standard of living in retirement -- just one of the many frightening statistics about retirement.

With that in mind, here are 10 of the scariest retirement statistics, and what you can do to improve your own retirement in 2016.

Americans are doing a poor job of saving for retirement
Some of the scariest statistics involve the amount -- or lack thereof -- that Americans are setting aside for the future. Just to name a few:

Expenses aren't getting any lower
One big problem with retirement savings – even for those who have enough – is that the cost of living increases over time, and at an unpredictable pace. This is why, even if you invest well and only withdraw 4% of your nest egg each year, you can only reasonably expect your savings to last for about 30 years, according to most experts.

Sure, Social Security adjusts each year to reflect inflation, but Social Security isn't designed to be the only source of retirement income you have. To illustrate this, consider that:

Some costs really aren't getting any lower
One expense that can truly derail your retirement if you don't plan for it is healthcare. A common mistake is to assume that Medicare will pay for all of your expenses, including long-term care if you need it. However, the reality is rather different:

The good news
If you've fallen behind in your saving, or haven't started at all, it's never too late to do something about it. In addition to employer-sponsored plans such as a 401(k), you have the ability to set aside up to $5,500 per year in a traditional or Roth IRA. If you're over 50, you can contribute an additional $1,000 annually to help you catch up.

You have until the April 15 tax deadline to make your contributions, so if you get started promptly, you can make two years' worth of contributions in 2016 – one for the 2015 tax year and one for 2016.

To illustrate the concept that you can start late and still have an impact, let's say that you and your spouse are both 50 years old and have absolutely no retirement savings. If you get started in 2016, and max out your IRA contributions every year from now on ($13,000 in 2016), you could retire at 65 with a nest egg of nearly $448,000, assuming your investments match the S&P 500's historical average returns. If you can wait until 70 to retire, you could have more than $780,000. And this assumes you aren't saving money through your employer, as well. 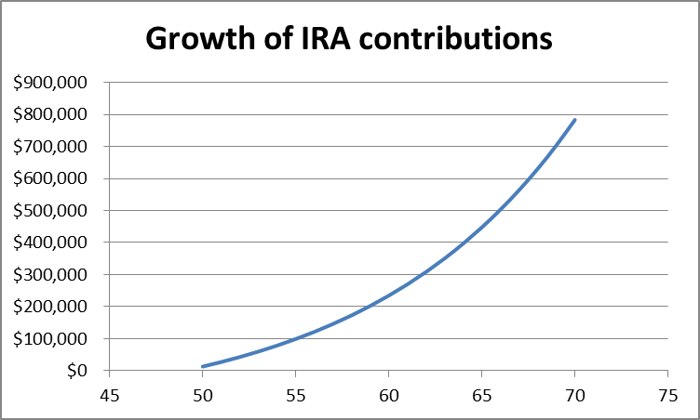 Would it have been better to start at age 30? Of course it would have. However, by saving aggressively and taking advantage of the power of compound returns, you can certainly make up for some of that lost time.

The Foolish bottom line
Just because millions of Americans aren't on track to retire comfortably doesn't mean that you need to be one of them. The prospect of saving enough to last throughout your retirement might seem like an impossible task, especially if you're getting a late start; but if you're still working, there's still time to build a meaningful nest egg.