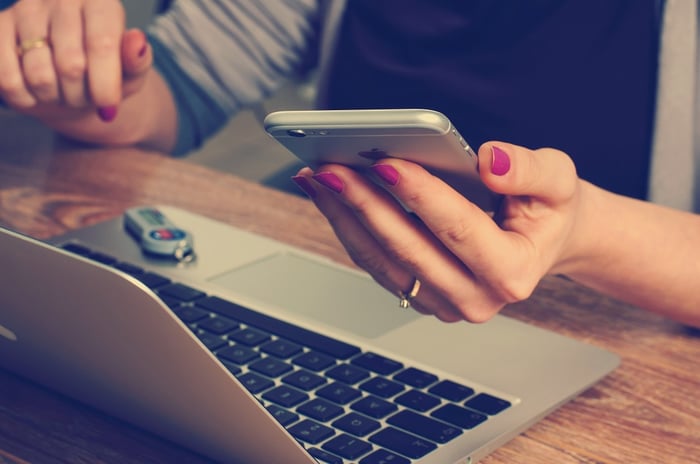 Banking on your future
We're going to begin this week with a company I own in my personal portfolio, and one that I'm pretty sure I've mentioned in this column before. Nonetheless, it may be time for a little doubling down on Bank of America (NYSE:BAC), perhaps the most-attractive money-center bank you can buy,

I'm certainly not oblivious as a shareholder to Bank of America's flaws. Bank of America's energy portfolio has roughly $21.3 billion in loans outstanding, of which $8.3 billion is deemed to be for high-risk oil exploration and production, as well as oil services companies. Although this represents only 2% of outstanding corporate loans, it could weigh on near-term profitability if some of these loans default because of falling oil prices. Additionally, weakness in Europe and China has weighed on global growth prospects, and the Federal Reserve's precipitously low lending rates have halted net interest margin expansion for Bank of America.

But I've been holding Bank of America for more than four years now, and I see no reason to sell. In fact, I see all the more reason to add. The biggest catalyst of all in my book is putting the vast majority of mortgage-related litigation in the rearview mirror. We're talking a cumulative $60-billion plus in fines since the Great Recession that's no longer going to weigh on B of A's earnings reports.

Secondly, CEO Brian Moynihan is focused on returning cash to shareholders now that regulators have given Bank of America the OK to do so. We're likely to see a mixture of increased dividends and share buybacks in the coming years. Share buybacks could be a particular focus, as Foolish colleague and Bank of America shareholder John Maxfield noted last month, because B of A had to dilute shareholders in order to raise equity during the mortgage meltdown.

Finally, Bank of America simply looks fundamentally attractive from a variety of standpoints. It's valued well below its tangible book value of $15.62, consumer and global deposits and loans are rising on a year-over-year basis, and its credit quality has steadily improved. Looking even two years down the road, Bank of America could produce a litigation-free year of $2 in EPS. That would represent a P/E around six, potentially making Bank of America one of the most-attractive value plays (remember my bias -- I own it!) out there.

Ladies and gentlemen, start your engines
Next up, we'll jog from the financial sector to industrials, and take a closer look at why auto parts supplier Advance Auto Parts (NYSE:AAP), which runs more than 5,200 retail locations in North America, could be a value stock worth adding to your portfolio.

What's been weighing on Advanced Auto Parts lately? Firstly, projections of a nearing top in auto sales have hurt automakers and parts suppliers without prejudice.

Weakness in key industrial stocks, such as autos, may be signaling that a global recession is around the corner. It's certainly not an exact science, but the company's low single-digit percentage sales growth underwhelmed a bit during its Q3 report. Higher than expected costs associated with its acquisition of General Parts International is the other issue.

That's the bad news. Now here's why value investors may want to dig a bit deeper.

For starters, Advanced Auto Parts' business model is actually set up for success in a rising and contracting market environment. During recessions, consumers still need to fix problems with their vehicles, but they'll look for cost-conscious options first. What better place than a do-it-yourself parts supplier like Advance Auto Parts? On the flip side, expansionary markets have a tendency to loosen wallets, also benefiting auto parts retailers. The company's focus on both retail and commercial customers helps, as well.

Another key point is that the General Parts acquisition should translate into cost-savings and margin expansion by as soon as next year. Based on commentary from the company during Q3, Advance Auto anticipates 12% operating income expansion in 2016. The deal also expanded Advanced Auto's presence, and it further solidified opportunities in the consumer and commercial channels.

And like Bank of America above, it's just fundamentally attractive. I am disappointed with its paltry dividend, and would expect a substantive increase in the coming years; but its forward P/E of 15, and the expectation for $12+ in EPS by 2018, lends to the belief that there could be some substantial value to be had in Advance Auto Parts' shares.

Setting up shop for the long haul
Finally, I'd encourage value investors with a bit of an iron stomach to turn their attention to real estate investment trust HCP (NYSE:PEAK), which earlier this week did its best swan dive impression after guiding its 2016 forecast well below expectations.

HCP is a purchaser of medical office buildings, hospitals, skilled nursing facilities, and life science buildings, which it then turns around and leases for a profit. The big issue of late has been its HCR Manorcare unit, which has struggled under the weight of lower Medicare reimbursement rates. Additionally, its HCR Manorcare unit is in the process of jettisoning 50 non-core assets. This transitional period is causing further disruption. Ultimately, HCP had this to say in its Q4 report:

As a result of HCRMC's fourth-quarter performance deterioration and the related decline in its FCC [fixed charge coverage], we placed our real estate portfolio operated by HCRMC on 'Watch List' status at year end 2015, and changed our accounting treatment to recognize rental income on a cash basis beginning January 2016. As such, we will no longer recognize non-cash accretion income under the HCRMC DFLs [direct financing leases], as reflected in our full year 2016 earnings and FFO guidance provided herein.

But there was good news, as well. HCP also announced that it was increasing its dividend for the 31st consecutive year – the only REIT among the Dividend Aristocrats. The new payout of $0.575 per quarter, combined with Tuesday's tumble, places HCP's sustainable yield at a whopping 8.1%. At that yield, with reinvestment, you could double your money on the dividend alone in about nine years.

Additionally, there's the long-term trend of an aging society working in the company's favor. As baby boomers head into retirement this decade and the next, the need for new medicines, housing, and hospitals is only going to increase. That looks like the perfect formula for HCP's pricing power to rise over time.

Let's not also discount the positives that low lending rates are having on HCP. Access to cheap capital allows HCP to expand for a fraction of what it may have cost a decade ago. Based on its guidance, HCP is only valued at 10 times its 2016 FFO, which, with an 8% yield, seems like a pretty solid value to me.