After retirement, most investors' goals shift, at least to some degree. Before retirement, the focus is on growth and accumulation, while capital preservation and income often take the backseat. On the contrary, after you retire, these become the two most important things. Even though your priorities may change, the stocks you buy in retirement don't necessarily need to be boring, nor do they need to lack growth potential.

With that in mind, here are three great stocks for retirees' portfolios.

I've written frequently about the merits of high-quality REITs for retired investors, so I'd like to begin with one of my favorites: Realty Income Corp (NYSE:O). This massive REIT invests primarily in freestanding retail buildings, and it currently has more than 4,500 properties in 49 states and Puerto Rico.

Now, retail may seem risky, but Realty Income invests in a type of retail that encourages stability and growing income. Most of the properties in the portfolio fit into one of three categories -- non-discretionary goods, service-based businesses, and low price point goods -- all three of which are virtually immune to competition from online retailers. Plus, most of the tenants are large, national brands, such as Walgreens, AMC Theaters, LA Fitness, and Family Dollar, just to name a few.

The company's business model is also consistent with the goals of post-retirement investing. Tenants sign long-term leases (15-20 years), and pay variable costs such as taxes, insurance, and building maintenance. Essentially, all Realty Income does is collect a monthly rent check, which generally increases year to year at a predetermined rate specified in the lease. This combination of strong businesses and long-term leases has resulted in an occupancy rate of 98.4%, which has never fallen below 96%.

For shareholders, this translates into consistent income growth and market-beating returns, essentially the Holy Grail of retirement investing. Realty Income pays its dividends in monthly increments, and it has increased its payout for 73 consecutive quarters. The stock currently yields 4.1% and has produced average total returns of 17% since its 1994 IPO.

If you don't need current income from your stocks
Many retirees rely on their stocks to produce income to cover expenses, and if this describes your entire portfolio, you may want to skip to the next section. On the other hand, if you have some money to invest that you won't need for a number of years, you may want to consider Berkshire Hathaway (NYSE:BRK.A) (NYSE:BRK.B).

The reasons to like Berkshire are simple. The company owns a long and diverse list of subsidiary companies that have been acquired over the years, such as GEICO, BNSF Railroad, NetJets, and Fruit of the Loom. And, investors also get a piece of Berkshire's portfolio that reads like a who's who of quality long-term stocks. In fact, Warren Buffett said in his most recent letter to shareholders that Berkshire's willingness to invest in companies it doesn't control (it buys stocks, not just entire companies) is one of its biggest advantages over peers.

Berkshire doesn't pay a dividend, and it's easy to understand why. Simply put, Warren Buffett and his team feel that it's in the best interest of shareholders to reinvest Berkshire's profits in additional acquisitions, stock purchases, and into its own businesses. And with a track record like Berkshire's, it's tough to make the case that a dividend would have been a better use of its capital over the years. 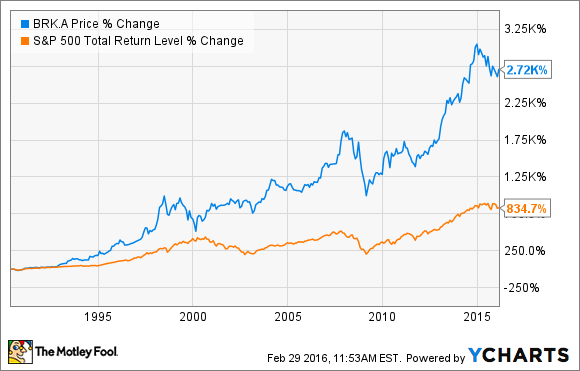 Although Buffett himself has warned investors not to expect the same 20%+ average returns Berkshire has produced over the past 50 years, it still has enough competitive advantages to consistently beat the market and to protect investors' money during tough times.

Lock in a strong dividend while it's down
Energy stocks are down because of plunging oil prices, and this isn't good news for those of us who own these companies. However, we also know that when a sector is beaten down like this, it creates an opportunity to load up on the best-in-breed companies at rock-bottom prices.

One of my favorites is National Oilwell Varco (NYSE:NOV), whose parts can be found on about 90% of all operating drilling rigs. In fact, the company has such a dominant position, its initials are often said to stand for "no other vendor."

Sure, revenue is down, and the company's once-impressive backlog has been cut in half over the past year, but there's one thing to keep in mind. At some point, all of the old drilling rigs in service will need to be upgraded and will need new parts. During the recent conference call, National Oilwell Varco CEO Clay Williams said, "nobody is really maintaining their fleets very well." In other words, with depressed oil prices, companies are cutting expenses, and one of these cuts is putting off replacing worn parts on rigs. So, this is creating a lot of built-up demand that will eventually work in National Oilwell Varco's benefit

Additionally, when times are tough, the stronger companies in a struggling sector tend to scoop up some of their weaker rivals at fire-sale prices and become even stronger. Just look at how Wells Fargo was able to scoop up Wachovia for $15 billion during the financial crisis, or how JPMorgan Chase was able to acquire Bear Stearns and Washington Mutual for a combined $4.1 billion. The same logic holds true here, and the company recently expressed how "excited" it is about acquisition opportunities.

For the time being, National Oilwell Varco pays an excellent 6.4% dividend yield while you wait for the oil market to recover.

Final thoughts
Notice that there are some common themes among these three stocks. All are leaders in their respective industries, have solid balance sheets, and have smart plans to grow over time.

Having said that, investors should know it's entirely possible for each of these stocks to go down in the short term. For example, if oil prices continue to slide to $25 per barrel, it would undoubtedly cause National Oilwell Varco to fall. However, timing the market is a losing battle, and all of these should deliver market-beating performance over any long holding period (let's say five years or more). And, two of them pay pretty attractive dividends that should provide somewhat of a price floor during any tough times.