Don't derail your retirement by making these common mistakes.

Your parents and grandparents might have enjoyed a reasonable degree of financial security in retirement because of predictable pension payments, but pensions have been phased out by many employers over the past decades. Most of us need to rely on ourselves more than our employers for our retirement. It's critical to take that responsibility seriously, aggressively saving and investing for retirement while making as few mistakes as possible.

Here are three major mistakes many Americans make that can shrink their savings and compromise their futures.

Selena Maranjian: One of the worst mistakes many people make regarding their retirement is putting off preparing for it. You might, of course, be contributing some money into a 401(k) account at work, but if you're just assuming that that plus Social Security income will carry you through your golden years, think again. You need to develop a retirement plan and then execute it, ideally beginning today or very soon. When it comes to saving and investing, procrastination can be surprisingly costly.

To understand just how costly, imagine that you plan to sock away $8,000 per year for 20 years, to fund your retirement, and you expect to earn an average annual return of 8%. What happens if you put it off and start this investing in earnest two years late? Well, if you sock away $8,000 annually for 18 years and it grows by 8% annually, you'll end up with around $323,570 . What if you didn't procrastinate and followed your plan for a full 20 years? Well, then you'd end up with $395,383 -- more than $70,000 more dollars! Note, too, that you end up with more than 70,000 extra dollars just by having made two extra $8,000 investments, or $16,000. The earliest dollars you invest have the most time to grow and can grow the most. By putting off saving aggressively for retirement, you're leaving many thousands of dollars on the table.

Be sure to spend the time to figure out how much you will need in retirement and how you will amass that sum. If you start saving and investing effectively (such as in inexpensive, broad-market stock index funds) while you're still young, it won't be too painful. If you put it off until your 40s or 50s, you'll probably be needing to save much bigger sums. 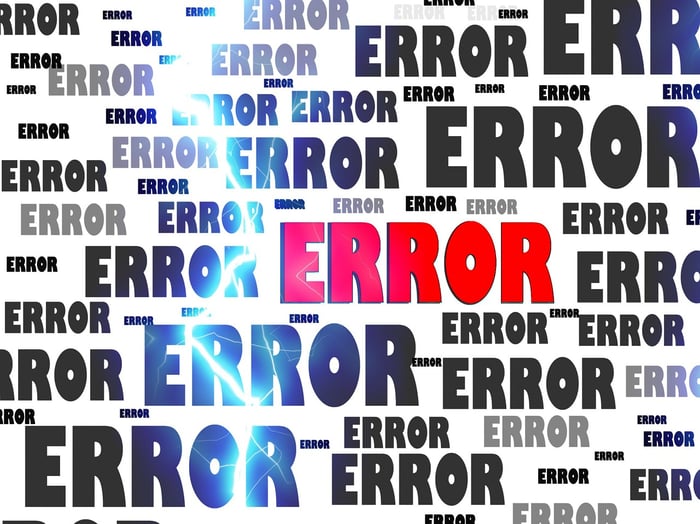 The more mistakes you avoid, the richer your retirement can be. Image: Pixabay.

Dan Caplinger: One of the biggest mistakes that retirees have made following long bull markets is forgetting to rebalance their investment portfolios on a regular basis. Before the financial crisis in 2008, the long bull market had given many retirement investors huge gains in the stock portions of their retirement savings, and that had pushed their allocations to stocks well above where they had originally started. The ensuing bear market plunge in 2008 and early 2009 was painful for everyone, but it was especially damaging to retirement investors who had above-average exposure to stocks from the previous bull-market advance.

Rebalancing simply involves selling off a portion of assets that go up in value when they start to represent a higher proportion of your overall portfolio than your asset allocation strategy says is appropriate. You then take the proceeds and buy assets that have fallen in value and now make up a smaller portion of your portfolio. By rebalancing once a year or so, you always have your portfolio tuned into the risk-reward relationship that makes you comfortable and that can help you prevent any uncomfortable consequences if the market behaves badly. If you don't rebalance, then you're running the big risk that a market downturn will cost you a larger portion of your paper gains than you had thought.

Trying to time the market can lead to losses. Image: Pixabay.

Jason Hall: One of the biggest retirement mistakes people make is something that often starts early: trying to time the market.

This may sound like something that only active stock traders do, but if you've ever drastically altered the composition of your 401(k) at work simply because of fear of a recession or as a reaction to the stock market having declined recently, you're making this exact mistake yourself.

The difference between 3.51% and 5.26% may look small, but it's significant over time. If you were saving $500 per month toward retirement over that 10 years, you'd have $7,500 less. And the longer someone tries to outsmart the market, the worse it gets. Make it 20 years of putting aside $500 per month, and the average investor would have nearly $61,000 less saved for retirement.

The market goes up and down. Nobody has proven they can consistently get in or out at the right time. Don't make the mistake -- one that has proven to cost millions of people billions in retirement savings -- of thinking you'll be able to. A better idea? Take Selena's advice and formulate a plan, and take Dan's advice and rebalance your portfolio over time. Once you've done those two things, it'll be much easier to stop meddling with your portfolio, and let time do the heavy lifting.

Be smart about your retirement investing. Don't leave everything to chance, wishful thinking, or just Social Security. A little planning and diligence can result in many comfortable years of retirement.