It's an under-appreciated fact, but one of the most important decisions you'll have to make about Social Security is when to start collecting it.

Once Social Security payments start, it's like getting money out of an ATM regularly. Image source: TaxCredits.net

Retirement ages
The Social Security Administration (SSA) has assigned each of us a "full" retirement age based on our birthday:

Why is it so complicated? Well, because the full retirement age has changed over time. It began at age 65 for everyone and was increased to 67. That partly reflects longer lifespans for Americans, but it was also done to strengthen the Social Security system by delaying or shrinking payments to retirees.

There may be more change ahead, too, as the system will need some kind of tweaking in order to not become insolvent at some point. Some presidential candidates are advocating making the retirement age even later, for example. That won't necessarily happen, though, as there are other ways to strengthen Social Security, such as raising or eliminating the cap on earnings that are taxed, or increasing the tax rate on earnings. 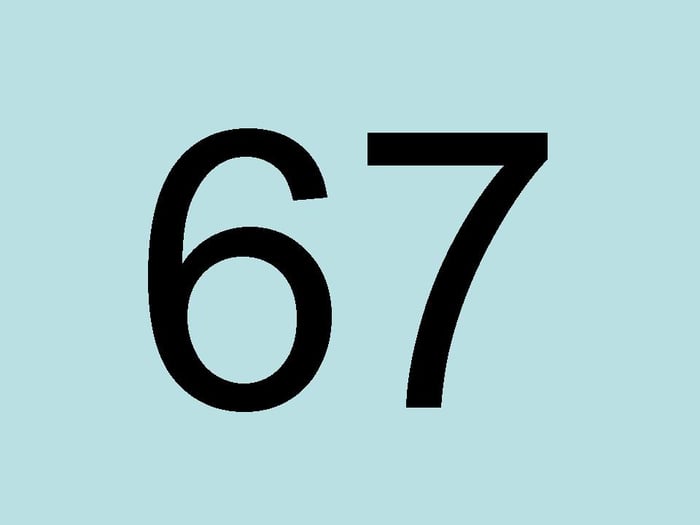 For many Americans, 67 is the magic age at which to start collecting full Social Security benefits. Image source: Stereo Pair, Flickr.

More or less
Let's get back to our key question, though. Assuming your full retirement age is 67, should you take Social Security at age 67?

It's perfectly reasonable to start collecting your benefits at 67, but you should know you have more options than that.

Those will likely seem like very big differences, and they may make you determined to delay until age 70. But the differences are actually not so great. Remember, for example, that if you delay from age 62 to age 70, you'll miss out on collecting five years' worth of benefit payments -- 60 payments in all. Your ultimate checks will be bigger, but you'll be receiving far fewer of them.

On top of that, the Social Security Administration has explained: "If you live to the average life expectancy for someone your age, you will receive about the same amount in lifetime benefits no matter whether you choose to start receiving benefits at age 62, full retirement age, age 70 or any age in between."

Strategizing
Given all of that information, there's a decent chance you're still not sure what to do. It's a good idea to start planning a strategy by finding out just what your full retirement benefits (those you'd receive if you start collecting at age 67) are likely to be. You can get a sense of how much to expect from the Social Security Administration's online Retirement Estimator tool, and you can get an even clearer idea of your expected benefits by setting up a my Social Security account with the SSA.

For context, know that the average Social Security retirement benefit was recently $1,344 per month, or about $16,000 per year. If you earned more than average over the years, you'll receive more than that -- but it will still likely be less than you'd like. The overall maximum monthly Social Security benefit for those retiring at their full retirement age was recently $2,639 -- or about $32,000 for the whole year.

To answer the "Should I take Social Security at age 67?" question take a little time to estimate how much income you expect to need in retirement, and how much you expect to be generating on your own -- perhaps via dividends, interest, annuities, etc. If you need more, you can aim to boost the income from your investments, or perhaps think about working a little longer to delay starting to collect Social Security. Delaying is also a reasonable strategy if you expect to live a longer-than-average life.

However, if you want to retire early, or at your full retirement age, know that it's not a grave error to start collecting at 62, 67, or somewhere in between.