If you've opened a new Roth IRA this year and are looking for investment ideas, here are three long-term stocks to get you started.

For Roth IRA participants, the bright side of paying taxes is getting to invest post-tax dollars in anticipation of tax-free withdrawals from investment earnings down the road. Generally, Roth IRAs are suited for taxpayers who have many years of employment income ahead, and thus a longer investment horizon. If you've recently opened a Roth IRA and are looking for investment ideas, here are three actionable long-term stock ideas to help you get started.

One way to participate in the airline industry
The global airline industry has exhibited increased profits over the last two years as fuel costs have been relatively stable and passenger demand has grown. The Middle East wants to supplant Europe as the preferred stopover between North America and Asia, and wealthy countries such as the United Arab Emirates are busy building state-of-the-art airports to entice increased traffic. China is slated to scale up its total number of airports by almost 45% in the next few years. Meanwhile, to meet demand, both large legacy carriers like Delta ( DAL -1.80% ) and smaller regional airlines are snapping up energy-efficient planes such as Boeing's ( BA -1.92% ) 737 series.

Is there a way to participate in this growing industry and remain somewhat insulated from its notorious boom and bust cycles? Try buying shares in a noncarrier company that participates directly in the industry's growth. Air Lease ( AL -1.97% ) purchases commercial aircraft and leases the planes to airlines. The company has an advantage over competitors in that it favors issuing its own corporate debt to buy aircraft free and clear, rather than using planes as collateral in a financed purchase. This provides the company more flexibility in optimizing lease rates over the long term, as opposed to private financing.

Air Lease may appeal to long-term investors because management is focused on a concept that basically boils down to a "young fleet with long leases attached," as chief operating officer John Plueger characterized it recently. Air Lease tends to sell its planes off as they age in order to maintain a relatively youthful fleet. Maximizing revenue and margin from a younger fleet with long leases helps Air Lease post quarterly profit margins in excess of 24%. The company also impressively grew year-over-year revenue by 31% in its last fiscal year.

Latch on to small-cap growth
Like Air Lease, Massachusetts-based Monotype Imaging ( TYPE )gets paid for use of its assets: It licenses Web fonts to corporations and provides technology and consulting for creative professionals. The company counts Google, Apple, and Oracle among its customers.  Montotype Imaging occupies an attractive niche in a growth industry, and in recent years, recurring sales for its products have grown to account for 50% of total revenue. In fact, CFO Scott Landers recently said 85% of the company's revenue was either recurring or predictable. The predictability of income allows Monotype Imaging to offer a dividend that currently yields 1%, which is somewhat rare for such a small-growth company.

Management plans to spend time in 2014 studying the company's opportunities to facilitate digital advertising. It believes that highly sought-after brands will be able to use its digital Web font technology for effective advertising across multiple devices and platforms. Monotype Imaging has excelled in recent years at adapting its licensed fonts to mobile devices, and a foray into digital advertising should help extend the company's growth.

This is a tiny company, with yearly sales of $166.7 million and a market capitalization of just $1.2 billion. But niche companies like Monotype Imaging can reward the patient investor. If you'd like a more diversified strategy for buying small-cap stocks, you can read up on a cost effective option here.

SPDR Dow Jones Global Real Estate ( RWO -0.24% ) is an exchange-traded fund, or ETF, that holds shares of various real estate investment companies. It has the attraction of dividing its holdings roughly evenly between the U.S. and the rest of the world, which theoretically provides stability to its returns. While you'll find representative investments from Europe to Japan in the fund's holdings, its largest position, at slightly less than 6%, is American mega-real-estate investment trust Simon Property Group ( SPG -1.76% ).

Income from the ETF's investments gets passed to shareholders via a dividend that today yields an enticing 3.6%. This dividend helps juice the fund's return: While the ETF has underperformed the S&P 500 over the last 12 months (just 1.9% total return versus the S&P's 22.5% total return), when you stretch out the time frame, the potential of the global real estate market starts to manifest: 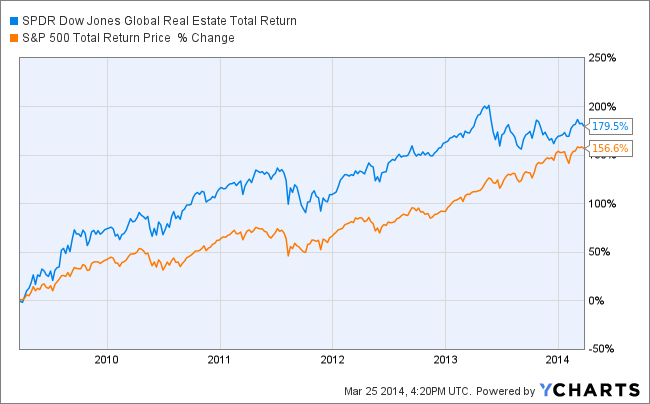 The Dow Jones Global Real Estate ETF sports an attractive expense ratio of 0.5%, so it's a fairly efficient way to put dollars behind this idea.

The point of this method
It's not difficult to come up with decent long-term investing themes for a Roth IRA. The trick is to identify sectors of the economy that have growth potential over your investment time frame, even if those sectors, like the airline and real-estate industries, happen to be cyclical. Strong companies and/or ETFs in a growth industry will give you solid chances to reach your retirement goals. And remember to max out that Roth IRA contribution every year.