Most people familiar with them know just the basics, but it’s good to learn more, lest you run afoul of some rules or not take advantage of some benefit.

Roth IRAs can be retirement savers, if used effectively. Most people familiar with them know just the basics, but it's good to learn more, lest you run afoul of some rules or not take advantage of some benefit. Today, three Fool contributors offer information you might not know or appreciate about Roths.

First, though, let's review exactly what a Roth IRA is, by contrasting it with its counterpart, the traditional IRA. With the traditional IRA, you contribute pre-tax money that reduces your taxable income and, therefore, your tax bill for the year. When you withdraw the money in retirement, it's taxed as ordinary income to you. With the Roth IRA, you contribute post-tax money -- i.e., sums that don't offer any upfront tax break. But you do get a tax break, and a potentially big one, when you withdraw from the account in retirement -- because you get to take all the money out of the account tax-free.

For more on IRAs, how they work, and how you can get started investing in one, head over to our IRA Center.

Dan Caplinger: The Roth IRA's best trait is that it can produce income and capital gains that's entirely tax-free, even after you withdraw it for use in retirement. In order to get that favorable tax-free treatment, though, you have to follow the rules; if you don't, some of your Roth gains might turn out to be taxable after all.

Contributions to Roth IRAs are never taxed, because they represent post-tax contributions that you made voluntarily. When it comes to the income and gains on those contributions, though, different rules can apply. First of all, if you withdraw any Roth income within five years of having set up the account, you'll have to pay taxes and penalties of 10% on the withdrawn amount. Second, if you haven't reached age 59 1/2, then you'll end up paying taxes on the portion of your withdrawal that represents earnings on your Roth assets. You might be able to have penalties waived if you qualify for certain special distributions, such as for a first-time home purchase, but often, you'll still owe tax.

Because withdrawals of contributions, either through direct deposits or via conversions of traditional retirement assets, are generally eligible for tax-free treatment, it's rare to have to pay income tax on a Roth IRA. However, the potential does exist, so make sure you know the rules before you take money out.

Jason Hall: The obvious benefit of a Roth, as Dan explained, is the tax-free growth and tax-free distributions in retirement. But what many people don't realize is that you may be giving up a bigger benefit today, especially if you pay a higher marginal tax rate now than you'll pay when you retire.

If this is the case for you, then here's one approach that's worth considering.

If you take the amount that you'd normally contribute to a Roth (the maximum for those aged 49 and younger in 2015 is $5,500) and instead increase your contributions to your 401(k), you'll reduce your taxes each year. If you pay 28% in federal taxes, that's $1,540 more you'll take home this year. Instead of taking it home, though, put that in your Roth. If you were to start doing this at 40 and keep it up until 65, you'd end up with nearly $133,000 more, based on an 8% annualized rate of return: 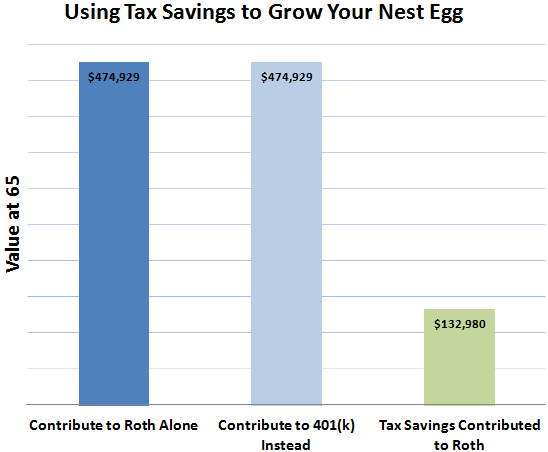 That would be worth about $1,600 per year in additional income if your tax rate fell to 20% in retirement, and you took the typical 4% yearly distributions.

Selena Maranjian: Many people don't realize it, but contributions to Roth IRAs aren't allowed for everyone. It's possible to earn so much that you're prohibited from contributing or that you're allowed only a reduced amount. Income limits are based on your modified adjusted gross income, or AGI. For 2015, they are as follows:

Your modified AGI is your AGI, with any of the following deductions you're taking added back to it: student loan interest, half of the self-employment tax, qualified tuition expenses, tuition and fees deduction, passive loss or passive income, IRA contributions, taxable social security payments, the exclusion for income from U.S. savings bonds, the exclusion under 137 for adoption expenses, rental losses, and any overall loss from a publicly traded partnership.

If you're wondering about traditional IRAs, your income doesn't limit your ability to contribute the maximum each year, but the deductibility of your contributions may be limited or entirely eliminated.

Finally, know that -- for now -- there's a "back-door" way to fund a Roth IRA for high earners that involves making a nondeductible IRA contribution and then converting that newly created IRA to a Roth. It's frowned on by some in Congress, so it might disappear one of these years, but for now it's available.

If you're a high earner, it's important to understand these Roth IRA restrictions. Most of us, though, won't be affected by them.