Now that you've rung in the New Year, you may think it's too late to qualify for any 2017 tax breaks. But guess what: There's one deduction that you can qualify for right up until April 17, when your 2017 tax return is due. Even better, this particular deduction reduces your income before you add up your adjusted gross income (AGI) on your 1040 tax form, meaning that it can lower your tax bracket, reduce your capital gains tax rate, and make you eligible for even more tax breaks.

So buckle your seatbelt and prepare to learn all about...

If you aren't already saving for retirement through a tax-advantaged account, then you should start now. Among the many other advantages, contributing to a traditional IRA may qualify you to take a tax deduction for the full amount of your contributions. Since the annual contribution limit for IRAs in 2017 was $5,500 for workers under 50 and $6,500 for workers 50 and older, this could add up to a substantial tax break. Qualifying for the IRA deduction is usually as simple as making contributions to a traditional IRA; the only thing that might disqualify you from the deduction is having an income above certain limits and a spouse with an employer-provided retirement account.

If you qualify to take the IRA deduction and you haven't already contributed enough to hit the annual limit during 2017, now would be a good time to make a nice big contribution to your IRA and max out this deduction. Making a late IRA contribution for 2017 is particularly powerful if you're right on the border between two tax brackets, but it can be a money-saving move for just about any taxpayer.

You see, most deductions reduce your income after you've totaled up the numbers to determine your AGI for the year. While these deductions can lower your overall tax bill by reducing your taxable income, they can't do anything to change your AGI. Your AGI is used to determine whether you're eligible for many tax breaks, and a lower AGI makes you more likely to qualify.

The IRA deduction, however, is one of the few tax breaks that can lower your AGI, potentially making you eligible for numerous benefits. For one thing, some itemized deductions make you subtract a percentage of your AGI from the expense before you can claim it. For example, to figure out your 2017 medical expense deduction, you have to subtract 7.5% of your AGI from your medical expenses -- so if your medical expenses for the year added up to $10,000 and your AGI was $60,000, you could only deduct $5,500 of those expenses (the $10,000 expense minus 7.5% of your AGI, or $4,500). Thus the smaller your AGI is, the less you'll lose out on when deducting those expenses.

In addition, many states use your federal AGI as the baseline for calculating your state income taxes, so reducing your federal AGI gets you a double whammy in lowering your total tax bill. 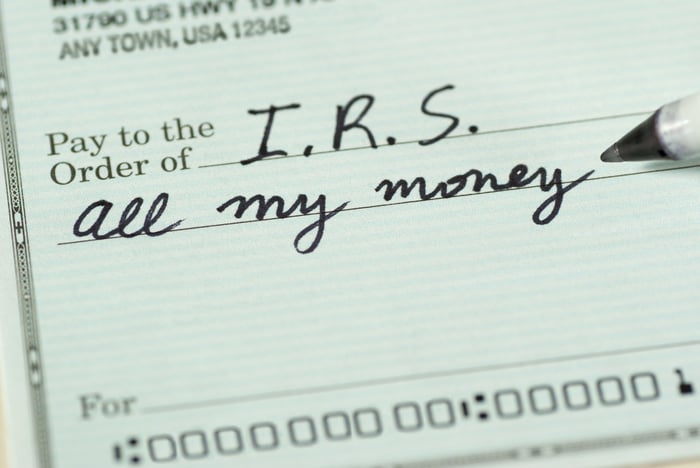 Let's take a look at a fictitious taxpayer who qualifies to claim the IRA deduction in 2017. This taxpayer will be using the single filing status and had wages of $60,000 for the year.

The IRA contribution limit for 2017 was $5,500 for savers under age 50. If the above taxpayer maxed out this limit with a late contribution, they would reduce their AGI to $54,500. Because they're in the 25% tax bracket, this deduction would reduce their total tax bill by $1,375. It would also make them eligible for other tax breaks; for example, with the reduced AGI of $54,500, they would qualify to take the full amount of the Lifetime Learning Credit, whereas if AGI had remained $60,000, this tax credit would've been reduced by half. Since the maximum Lifetime Learning Credit is $2,000, the AGI reduction from the IRA contribution could get them an additional $1,000 reduction in taxes, courtesy of this credit.

Now our fictitious taxpayer has saved as much as $2,375 in taxes from making a $5,500 IRA contribution. They could easily save more by qualifying for additional tax breaks and reductions to state income taxes. And we're not even getting into the income they'll receive from the contribution during retirement, which could be many times that initial contribution.

How to make a late IRA contribution

If you decide to make a 2017 IRA contribution in 2018, you'll need to make sure your IRA trustee correctly attributes the contribution to the previous year. Otherwise, the trustee might apply it to your current year's contributions instead, which could cause you to lose the tax break for 2017 and potentially go over your contribution limit in 2018.

Before you turn in your 2017 tax return, find out if you qualify for the IRA deduction -- and if you do, take the opportunity to hit your 2017 contribution limit ASAP. If you max out your IRA contribution, the IRS will reward you handsomely with tax savings -- and you'll have taken a major step toward hitting your retirement savings goals.