Find out why parents can do more with these tax-favored plans now.

Last year's tax overhaul made huge changes to key provisions of the tax code. Substantial rate reductions were included in the final version of the bill, and its provisions expanded certain tax breaks while eliminating or restricting others.

Although many people focused mostly on the big-headline changes to corporate and personal tax rates, one less-discussed provision expanded the use of Section 529 plans. These plans have long been referred to as college savings plans, but under the new rules, parents will be able to use money saved within them for certain educational expenses that aren't associated with attending college. 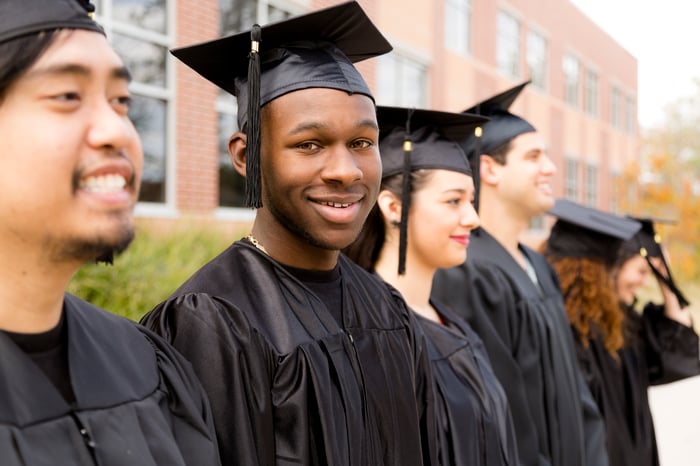 What the new rule does

Section 11032 of the Tax Cuts and Jobs Act made an amendment to the existing Section 529 of the Internal Revenue Code, which is the provision that created college savings plans and is where the popular 529 plan name came from. The new law now includes Section 529(c)(7), which adds to the definition of "qualified higher education expense" any expenses paid for tuition "in connection with enrollment or attendance at an elementary or secondary public, private, or religious school."

In practical terms, what that means is that funds in 529 plans are now available for tuition for those in kindergarten through 12th grade. If a child goes to school at an institution that charges tuition, you can take distributions from a 529 plan to pay it, and any earnings from those distributions will be fully tax-free -- just as they would be if you'd used the money for permitted college expenses.

Some limits and challenges with the new rule

The last-minute addition raised some controversy, much of which centered on disparate views regarding tax breaks for religious school education. There are also some things that parents need to keep in mind with the new provisions.

First, there's a limit on parents' ability to take 529 plan distributions for elementary, middle, or high school expenses. A maximum of $10,000 is allowed each year for those purposes. No such annual limit exists for college expense withdrawals.

Also, not all states will necessarily follow the same tax rules regarding K-12 withdrawals as the new federal rules. What that means is that if you take a withdrawal to cover pre-college educational expenses, you might have to pay state income tax and penalties on the money withdrawn even if it meets the requirements for tax-free treatment under federal law.

Fundamental changes in the 529 plan

Most importantly, the change in the purpose of the 529 plan will present challenges to the structure of certain plans. For instance, some prepaid plans were geared toward use at colleges and universities, with plans having made arrangements to ensure that participants would lock in a certain fraction of a year's college costs. How those plans would adapt for use to cover non-college expenses is unclear.

Similar challenges will exist for the companies that manage investments for 529 plans. Up until now, plans have been able to assume that all participants have a time horizon that culminates when the student reaches college age. By encouraging early participation, plans can get investors who have almost 20 years to invest and grow their savings. But now, it's entirely possible that some savers will want to start making withdrawals when their children are just five years old. That will make it impossible to come up with appropriate age-based portfolios that will handle every situation equally well.

How 529 plans will respond isn't yet clear. Some believe that putting a minimum time restriction on 529s will at least ensure that investors will benefit from a long-term investment mind-set. Yet doing so will discourage those who get a late start from using the plans at all, and that's a disincentive that policymakers might not be happy creating.

Even with the changes, one thing remains true: The longer you have money in a 529, the longer it can grow and provide tax-free income and gains to cover educational costs. That means that for most people, it'll still make sense to target 529s for college use, where the funds will have the most time to grow. Only those with enough wealth to cover most or all educational costs up front will likely get much added benefit from being able to use 529 plan money for younger students.