Find out which one of these could get a big haircut next year.

Tax season has just about wrapped up, and tens of millions of Americans have filed their tax returns for the year. Although it's impossible to avoid taxes entirely, taxpayers do their best to take full advantage of the deductions, credits, and other tax breaks available to them in order to cut the amount they have to pay to the IRS.

One way that many Americans save on taxes is by itemizing their deductions. About 45 million taxpayers itemized on the most recent returns for which IRS data is available. That's roughly 3 in 10 returns, and when you add up all of the deductions they took, taxpayers reduced their taxable income by more than $1.25 trillion as a result. Below, you can see the biggest deductions they took. 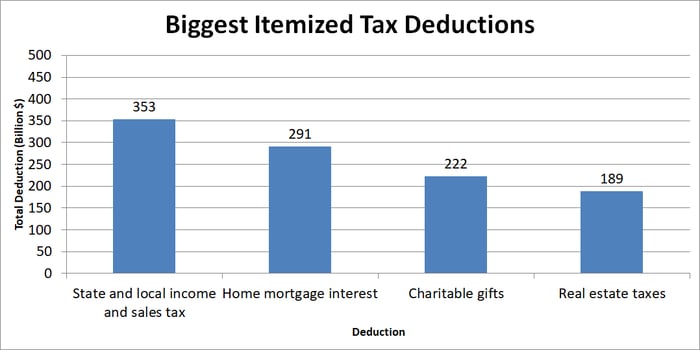 Going forward, taxpayers will find that their behavior changes significantly when they file their tax returns early in 2019. The recent tax reform bill dramatically increased the standard deduction, almost doubling it from previous levels. Many taxpayers will find that it no longer makes sense to itemize deductions because the standard deduction will be larger.

Also, tax reform put a limit on the total amount that taxpayers are allowed to itemize for state and local income, sales, and real estate taxes. With a cap of $10,000, those in high-tax states will find themselves with fewer itemized deductions than they've had in the past.

That doesn't mean that tax planning opportunities are going away entirely for the 2018 tax year. It just means that you'll have to make some changes to the way you've done things in the past in order to take advantage of those opportunities. If you've finished your tax return for 2017, it's not too early to start thinking about ways you can save in 2018 and future years.