Find out where you stand in comparison to your fellow U.S. taxpayers.

Another tax season has ended, and unless you've had to ask for an extension to get some more time to file your final return, you can take a well-earned break from thinking about your taxes for at least a little while. Yet one thing that inevitably comes up when you're adding up all your income and deductions to come up with how much tax you'll owe -- or how big your refund will be -- is how your income compares to what your peers make.

It's too early for the IRS to know what everyone reported on the tax returns that they've just filed, but information from 2016 tax returns is already available. The chart below indicates the number of tax returns in each income bracket shown, along with the total amount of income tax after credits that those taxpayers had to pay. (Click here to enlarge.) 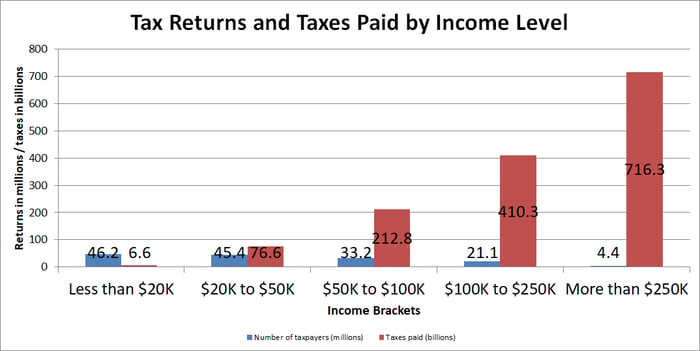 Those numbers are consistent with a progressive tax system, although they also lend support to the inequality of income distribution among U.S. taxpayers. As you reflect on your recently filed tax returns, keep these numbers in mind as you figure out where on the income spectrum you fall.