Please ensure Javascript is enabled for purposes of website accessibility
Log In Help Join The Motley Fool
Free Article Join Over 1 Million Premium Members And Get More In-Depth Stock Guidance and Research
By Dan Caplinger - Mar 27, 2020 at 10:03AM

Unlike coronavirus checks, this relief doesn't depend on your income.

Lawmakers in Washington have worked hard all week to try to come up with legislation to help those whom the coronavirus pandemic has hurt financially. With a $2 trillion stimulus package having passed through the Senate on Wednesday night, many are hopeful that by the end of Friday, the nation could start getting some of the positive effects of financial assistance from the federal government.

By far the most attention among average Americans has gone to the coronavirus checks that are included in the Senate bill. That makes sense, given the immediate impact that $1,200 for adults and $500 for children can have on your finances. But not everyone will get a coronavirus check, because eligibility is subject to income limits.

Also included in the Senate bill is a provision that would unlock an additional tax break for millions of taxpayers who haven't been able to use it in recent years. Not only is it good news for taxpayers, but it'll also help some worthy causes that are in the best position to offer further aid to those in need. 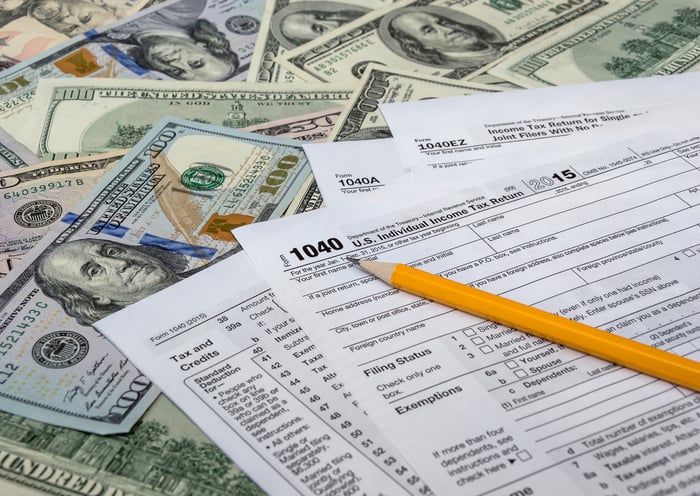 Bringing charitable deductions to all

Historically, the tax laws have allowed taxpayers to claim a deduction for money that they gave to charitable organizations. Whether educational, religious, scientific, or literary organizations, those charities that filed for 501(c)(3) status with the IRS could accept donations and offer tax deductions to their donors.

However, charitable deductions have generally been available only for those who itemize their deductions on their tax returns. Prior to tax reform efforts in late 2017, that wasn't as big of a problem, as the standard deduction was relatively low and the ability to itemize a wide variety of different expenses was greater.

When tax reform caused the standard deduction to nearly double and imposed new limitations on the deductibility of other expenses, especially state and local taxes, it greatly reduced the number of people who itemized their deductions. That in turn made it far less likely that charitable donations would actually result in an additional deduction. At the time, charities were worried that giving levels would go down, and early indications did indeed show reduced giving levels in 2018 and 2019.

A new break for those who don't itemize

One solution that charities suggested was to eliminate the need to itemize deductions as a precondition of claiming a tax break for donations. That plea went unanswered until Congress took up the coronavirus stimulus bill.

Buried in the hundreds of pages of the coronavirus bill, you'll find a simple tax break for donors. The provision is titled "Allowance of Partial Above the Line Deduction for Charitable Contributions," and it effectively eliminated the need to itemize in order to claim at least some of your charitable donations as a deduction.

Specifically, the version of the bill that the Senate passed would allow taxpayers to claim up to $300 in charitable donations as what's known as an "above the line" deduction. That term is legal jargon for a deduction that you don't have to itemize in order to get. Additional contributions would still be eligible for deduction if you itemize, ensuring that the measure won't hurt anyone who already gets a tax break from their charitable giving. The measure would be effective for the 2020 tax year, so those who haven't filed their taxes yet this year shouldn't expect to see this break on their 2019 returns.

A small but important deduction

Admittedly, being able to write off a $300 deduction will have a relatively small impact on people's taxes, saving them anywhere from $30 to $111 depending on their tax break. Nevertheless, the news is good for charities -- and it could represent the small opening that could let charitable organizations get their foot in the door and eventually negotiate more extensive tax breaks for giving in the future.