Please ensure Javascript is enabled for purposes of website accessibility
Log In Help Join The Motley Fool
Free Article Join Over 1 Million Premium Members And Get More In-Depth Stock Guidance and Research
By Maurie Backman – Jul 11, 2020 at 10:06AM

Each year, most people who file taxes wind up with a refund from the IRS. But what if you land in the opposite position this year? It's never fun having a tax bill on your hands, but right now, because of the financial stress the COVID-19 crisis has caused, parting with any amount of cash may seem next to impossible.

If you're worried about owing the IRS money and not having the funds to pay it, you're not alone. Despite the fact that the tax-filing deadline was pushed back from April 15 to July 15 this year, an estimated 37% of filers don't have the financial resources to pay their 2019 tax debt, according to a recent survey by TaxAudit.

Part of the problem boils down to the fact that millions of Americans are unemployed right now due to the pandemic, while others have seen their hours or income slashed. If you're unable to pay your tax bill in full or at all by July 15, here are a few things you can do. 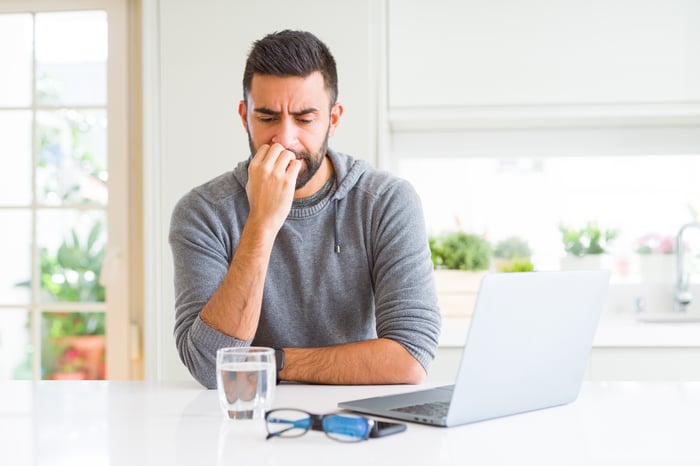 1. Avoid filing an extension (or at least don't file one for the wrong reason)

People who need more time to complete their 2019 taxes can request an extension and automatically get an extra three months to get their returns submitted to the IRS. But while that might seem like a good solution when you owe money, a tax extension won't actually buy you more time to pay the IRS. All it will do is help you avoid a failure-to-file penalty.

Granted, that penalty can be costly, so if you're unprepared with your tax return come July 15, an extension is your best bet. But don't request one because you think it'll get you out of accruing interest and penalties on the sum you owe.

2. Get on a payment plan

Not being able to pay a tax bill in full is nothing new. Even before the pandemic, the IRS was willing to work with filers who couldn't pay their debts on time. If you're unable to pay some or all of your tax bill by July 15, you can reach out to the IRS and get on an installment agreement, which will give you the option to pay your outstanding debt over several years.

There are fees involved, and you will accrue interest on the sum you owe. But this way, the IRS won't come after your wages in an attempt to get its money.

3. Avoid whipping out a credit card

Credit cards allow you to pay off purchases over time, so you can use one to charge your tax bill and then carry that balance. But that's a poor choice for a few reasons.

In some cases, the IRS will agree to a lower amount than the sum you owe on your taxes. It's called an offer in compromise, and it basically lets you off the hook, to some degree, if you owe a larger amount of money. But before you get excited about negotiating down your tax debt, keep in mind that you'll really have to prove to the IRS that you're not capable of paying it in full. And that's not an easy thing to do.

Owing money on taxes is stressful in its own right. During a pandemic and financial crisis, it's even more so. But don't panic if you finish up your return in the next few days and learn that you owe money, because you may find that you're able to pay off that debt affordably without racking up a ton of interest in the process.