Most people who file their taxes get money back in refund form as a result. But that doesn't always happen. If your earnings increased a lot but you never adjusted your withholding, you could have an underpayment on your hands, which means you owe the IRS money, and soon. You're required to pay your tax bill by the filing deadline, which, this year, is July 15.

But what if you don't have the funds available to pay that sum? If you weren't expecting to owe money, it's a likely scenario. Still, you can't ignore an outstanding tax bill, because if you do, you may be in for an unpleasant surprise: garnished wages. 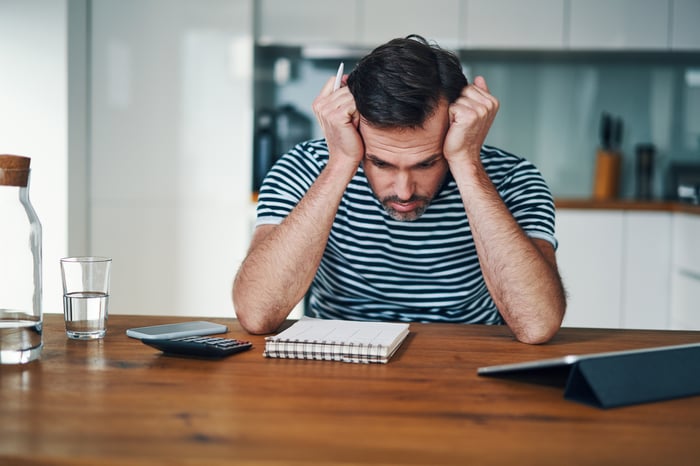 Get on top of your tax bill

There are consequences involved when you're stuck with a tax debt you can't pay. For one thing, you'll be charged a late payment penalty equal to 0.5% of your unpaid taxes for each month or partial month you don't pay, up to a total of 25%. You'll also accrue interest on that unpaid sum.

But that's not all. If you don't make any effort to pay the IRS what you owe, the agency has the right to come after your wages. Furthermore, whereas most creditors need a judgment to be entered against you in court to move forward with a garnishment, the IRS does not. Therefore, if you owe money on your taxes, you can't just neglect the problem and hope it will go away, because it won't -- it will only get worse.

That said, the IRS can't start garnishing your wages out of the blue. The agency will first send you a notice and give you an opportunity to pay your debt. But if you don't, the IRS will start taking money out of your incoming paychecks to get itself paid.

Now that's all pretty scary, but here's some good news: One simple move on your part could help you avoid losing money to wage garnishment. All you need to do is reach out to the IRS and get on a payment plan (known as an installment agreement). Though you'll pay a modest fee in exchange, and you'll continue to accrue interest and penalties on the sum you owe, if you have an installment plan in place, and you stay current on the payments it calls for, the IRS won't come after your wages at all.

Plan on owing money -- even if you usually don't

Though the majority of filed tax returns wind up being eligible for refunds, things don't always work out that way. Even if you typically get a refund, it always makes sense to set funds aside so you'll have the means to pay the IRS if it turns out you owe money. And if you wind up owing a lot this year, it could pay to adjust your withholding so more tax is taken out of your paychecks along the way. Though you'll get less money each month, you'll be less likely to get hit with a giant tax bill when you go to file your next return.

What Happens If I Owe Money on My Taxes but Don’t Pay? @themotleyfool #stocks Next Article
Current