Yes, it's even worse than not getting your hard-earned refunds back.

2020 has been a terrible year for millions of people. Between the health threat of COVID-19, the loss of jobs for tens of millions of American workers, and all the regular challenges people face in their everyday lives, the last thing many can afford is a hassle from the IRS.

Unfortunately, that's exactly what many American taxpayers have gotten. It's bad enough that the IRS has held up refund checks for millions of taxpayers. But now, there are reports of the federal tax agency going after people inappropriately -- even when they've done absolutely nothing wrong. 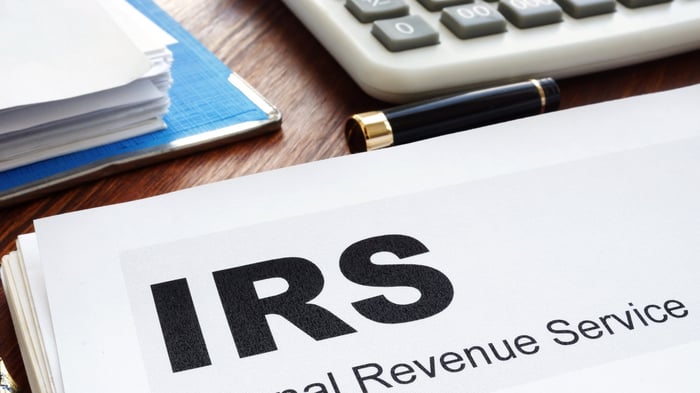 The dangers of filing a paper tax return in a pandemic

For years, the IRS has urged taxpayers to file their tax returns electronically. The 2020 tax season was no different, and even before the coronavirus crisis hit, taxpayers were urged to forego using paper tax returns.

However, the federal government hasn't yet mandated that people use electronic filing. Because there's an added cost involved and because some people don't have access to the resources needed to file electronically, the IRS still gets millions of paper tax return filings each year.

Plenty of people filed paper tax returns this year expecting to get their refunds in a timely manner. Months later, many still haven't received those refunds. The reason? The IRS chose to suspend paper tax return processing during the height of tax filing season.

The reason was completely understandable at the time. The IRS largely shut down its processing centers in order to protect its workers from contracting COVID-19. Also, early in the pandemic, there was a lot of concern about the potential transmission of the disease through the mail. The last thing anyone wanted was for IRS workers to get sick because of handling paper tax returns.

However, many of those facilities have now reopened. The IRS national distribution center opened its doors in mid-July, and officials at the tax agency said they expected full staffing levels shortly thereafter. Some of those employees are working remotely, but the IRS still seemed optimistic about its ability to catch up with its backlog.

What taxpayers are facing

Unfortunately, that hasn't led to everyone getting their tax refunds yet. Recent reports have told stories of taxpayers who filed their returns way back in February in hopes of getting a faster refund. They're still waiting on their money.

Even worse, the IRS is sending collection-related notices to some taxpayers who've already filed paper returns. In one case, a taxpayer filed paper tax returns months ago, sending a check to cover payment. But it seems that neither the return nor the check went through. The IRS is therefore sending letters warning of interest, penalties, and even fines for not having filed a return or paid tax.

Those taxpayers who've requested six-month extensions still have until Oct. 15 to file their 2019 tax returns. If you're one of them and you're expecting a refund, the lesson is obvious: Do not under any circumstances file a paper tax return. Otherwise, you could end up waiting just as long as earlier filers have to get your money back from the IRS.

For those who've already filed paper returns, however, there's not much to be done. If you get notices from the IRS, responding with an explanation that you've already filed a paper return that apparently hasn't been processed should be the best way to address the situation. The uncertainty, however, does make it a lot harder to do good tax planning as the end of 2020 approaches.