With the aging of America, opportunities in healthcare are plentiful, as are positions in a few niche industries.

Seven of the top 10 fastest-growing careers in the U.S. through 2024 will be health-related, according to the Bureau of Labor Statistics -- and that's really not really surprising, given the advancements in medicine, longer life spans, and an aging baby boomer population, according to the Bureau of Labor Statistics. For those considering a career change or who are just entering the job market, not only are healthcare positions plentiful, but they also tend to pay well.

The need for skilled healthcare professionals may not come as a surprise, but some may find it intriguing how few technology-related positions are included in the 30 fastest growing jobs in America. Web Developer is expected to be the 22nd fastest growing career, climbing 26.6% to 188,000 positions to be filled, but that's about it for technology jobs. Here are a few of the other careers expected to lead the employment charge in the coming years. 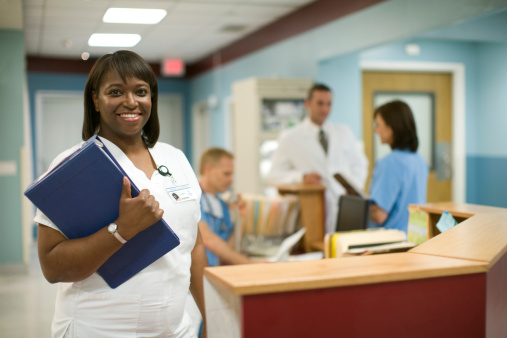 Though the figure is a bit skewed given the relatively small number of positions needed, positions for wind turbine technicians is expected to slightly more than double from 4,400 in 2014 to 9,200 by the year 2024. Another position on the BLS career list in the alternative energy space is solar panel installers, which falls at number 29 with an estimated demand for 7,400 professionals needed in 2024, a 24.3 increase over 2014 figures.

If alternative energy is a passion but pay is also an important consideration, stick with the wind turbine tech role which pays an average of $52,260 a year, well above the median annual wage for all 30 roles of $37,040. Pay for solar panel installers is expected to be $39,240 per year.

The second through fifth fastest-growing careers are various therapy assistants. Occupational therapy assistants jobs are expected to grow at a 42.7% clip to 47,100 positions by 2024, and there's an expected 40.6% bump in physical therapist assistant roles to 110,700.

BLS also expects the need for physical therapist aides will climb 39% with 69,500 positions to be filled, followed by a whopping 1,261,900 home healthcare aide jobs, 38.1% more than a couple of years ago.

In general, the additional education and training required for the assistant roles result in salaries more than twice that of aide positions. Occupational therapist and physical therapist assistants will earn $59,010 and $56,610 respectively, while physical therapist aides' annual salaries fall to $25,680. Home health aides bring up the rear pay-wise of the four careers with an expected annual wage of $22,600.

Interestingly, the sixth-fastest growing career between now and 2024 is commercial diving. According to BLS, the need for scuba-wearing men and women who are able to conduct below-the-water repairs, installation, inspection, and removal will rise 36.9% to 6,000 in seven years. The folks willing and able to do their jobs under water can expect to earn about $49,090 a year.

In terms of annual salaries, health-related careers again lead the charge. The three highest-paying, fast-growing careers begin with nurse practitioners who earn an average of $100,910 a year. The need for nurse practitioners will increase by 35.2% to 171,700 positions available, placing it at number seven on the list.

The highest salaried position of the 30 jobs included in the BLS list is for optometrists who earn an average of $106,140 each year. By 2024 there will be 51,600 optometrists needed in the U.S., a 27% jump. The third and final six-figure career goes to one of the 123,200 trained physician assistant (PA) positions to be filled in the next several years.

The reason PA's command a salary of $101,480, well above many others in healthcare, is the role is essentially that of a doctor: PAs work on teams with physicians and surgeons diagnosing along with treating patients. As you might imagine, a master's degree and state license to practice are required to become a physician assistant.

Here is a complete list of the Bureau of Labor Statistic's top 30 fastest growing careers, with average salaries and growth rates through 2024. The jobs on the list are quite diverse, but it's clear that careers in medicine dominate. If I had to guess, the trend towards growth in healthcare-related jobs will likely continue well beyond 2024.