Please ensure Javascript is enabled for purposes of website accessibility
Log In Help Join The Motley Fool
Free Article Join Over 1 Million Premium Members And Get More In-Depth Stock Guidance and Research
By Maurie Backman - Oct 3, 2017 at 9:09AM

Never take vacation? Here's how to pull off that much-needed escape from work.

American workers just aren't good at taking vacation. Last year, over 50% of U.S. employees admitted to leaving vacation days on the table, and back in 2014, more than 40% of workers claimed they failed to take a single day of paid time off.

And it sort of makes sense. For many folks, taking vacation means falling behind on key work-related responsibilities, and, in extreme cases, putting their jobs at risk. For others, meanwhile, a few days of relaxation may not be worth the hassle if it means clocking in long hours before and after to compensate. 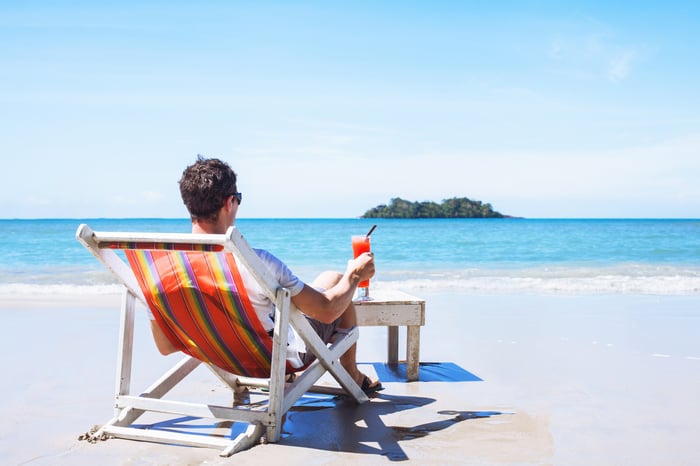 But here's the problem: If you don't take vacation, you risk falling victim to on-the-job burnout, and that could mess with not only your mind, but your productivity. A better approach is to learn how to take time off without worry. Here are a few ways you can make that happen.

A big reason so many people forgo time off is that there's no one available to cover their workload in their absence. But if you train some of your colleagues to take over your responsibilities many weeks or months ahead of time, you should have much less of a problem disappearing for a number of days. In other words, advanced planning may be the key to a stress-free vacation, and if you leave yourself plenty of time to train others slowly over time, you'll be better positioned to take off when you want or need to.

Furthermore, don't just rely on one individual to cover for you while you're away -- no single person is going to want to shoulder that burden. Rather, divvy up your responsibilities so that you're not dumping on any single coworker while you're away. Have one colleague, for example, be your point person for urgent emails, and ask another to compile and send out the weekly data reports you're known to distribute. You might then have an additional team member attend key interdepartmental meetings on your behalf, while a fourth individual follows up on ongoing projects in your absence. The more you diversify your backup plan, the more feasible it'll be to enact.

And don't just train a few key people and call it a day. Document your processes so that technically speaking, anyone in your company could conceivably take over for you while you're out. This will not only make it easier for others to assist, but it will also help you avoid incessant questions and phone calls while you're away.

Sure, the idea of escaping to a warm beach in early December might seem nice. But if your business tends to experience a holiday rush, leaving smack in the middle of the madness isn't a good idea, and as soon as you see how busy things are getting, you're more likely than not to cancel your plans. On the other hand, if you pick a less hectic time to get away, you should have no problem pulling it off. A lot of this means not only knowing your industry, but sitting down with your boss and mapping out long-term projects to get a sense of when you'll have the easiest time getting away.

A big reason many folks don't take vacation is that they're afraid of letting their managers or team members down. But if you plan your time off well in advance, and let people know about it, you won't feel the same sort of pressure to stay put.

Say you're aiming to take time off in April. Start by clearing it with your boss in February, and, once approved, shoot a note to your team later that month giving them a good eight weeks' notice. Send a similar follow-up in late March to your boss and team, and another one two weeks before you're set to depart. This way, your time off will be on people's radar, and they'll think twice before asking you to jump on a major assignment a day or two before you're set to leave.

4. Accept that you'll probably come back to a pile of work and email

Even with the most reliable backup plan and team in place, taking vacation almost always means coming back to a fair load of work, not to mention email. But don't let that deter you from taking the time you need to recharge. Rather, accept that you're apt to return to a heavy workload, and make time in your schedule to put in a little extra time at the office. And don't worry -- that work will eventually get done, and if you go away having tackled all of your big priorities beforehand, there's a good chance those other things can wait.

Everyone needs a little break from the grind, so stop making excuses for not taking vacation and book some time away from work. You'll be thankful you did in the end.