Please ensure Javascript is enabled for purposes of website accessibility
Log In Help Join The Motley Fool
Free Article Join Over 1 Million Premium Members And Get More In-Depth Stock Guidance and Research
By Maurie Backman - Oct 13, 2017 at 7:47AM

We all want to earn more money, not less. But in some situations, the latter might actually make sense.

Most working folks strive to earn more money as their careers progress. Many, in fact, are willing to fight for a raise when their companies aren't so eager to be generous.

But it's not always the case that the more we work, the more money we earn. In fact, many workers inevitably wind up taking pay cuts during their careers, and for a host of reasons. Though seeing your salary go down may not be ideal, here are a few scenarios where accepting a pay cut might make sense. 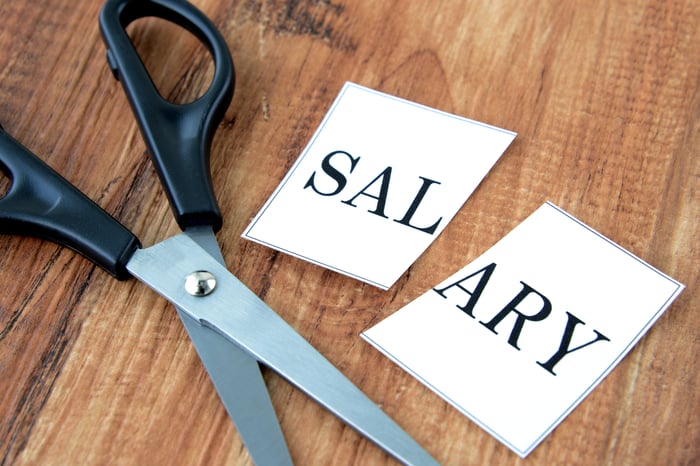 1. You're getting your foot in the door at a better company

Perhaps your company is smaller and therefore offers limited upward mobility. If that's the case, and you're offered a lower-paying job at another company, accepting that offer could pay off in the long run. Imagine you're forced to take a $2,000 pay cut, but after two years, get promoted and start earning $8,000 more than what you made at your initial job. Despite that temporary setback, you'll be better positioned to move up and earn more money going forward.

Maybe you've grown tired of your current industry or want to do something more creative. Changing careers is often necessary if your goal is to find work that's more fulfilling, but it often means taking a pay cut in the process. After all, you're starting off on the ground level, and though you might bring some universal job skills to the table, you'll still need to prove yourself in the context of your new field. But if switching careers ends up making you happier for the next 10, 20, or 30 years of your life, a short-term pay cut is most definitely worth it.

3. You can negotiate for a better work-life balance

Countless Americans struggle to achieve a reasonable work-life balance. But if you're tired of feeling like you live at the office, a pay cut could be your ticket to a more manageable schedule. Imagine that your employer is willing to be flexible and let you cut down to 32 hours of work per week so that you have ample time to tend to your family and household needs. If that's the case, but you need to give up 20% of your salary to make it happen, it might be a worthwhile sacrifice if it buys you a better quality of life.

4. You're offered a job in a less expensive city

The cost of living can vary significantly from state to state, or even from city to city within the same state. So if you're offered a job at a lower salary, but in a far more affordable locale, you could end up coming out ahead financially. Imagine the average cost of a one-bedroom apartment in your city is $2,000 a month, but you're able to relocate someplace for work where the same setup costs just $1,400 on average. Even if you end up taking a $5,000 pay cut in the process, you'll be better off financially by virtue of your housing costs alone.

While a pay cut may be necessary on the road to a better job or more rewarding opportunity, before you agree to one, be sure to have some emergency savings on hand. It might take you some time to adjust to your new income, and having money in the bank can help you avoid debt during that transition period. Furthermore, be sure to adjust your budget once you see how much money your new paycheck actually puts in your pocket. If you relocate for a job, for example, you may end up subject to a different state or local tax rate that impacts your ultimate take-home pay.

Finally, don't use your lower paycheck as an excuse to let your retirement savings fall by the wayside. Just because you're earning less money doesn't mean you can neglect your nest egg, and while you may have to decrease your contributions (at least temporarily) to compensate for your reduced earnings, don't make the mistake of ignoring your IRA or 401(k), either. Remember, just because your income has taken a dip doesn't mean you won't see an increase shortly, and if you keep up your savings efforts, your temporary financial setback won't derail your long-term goals.