You spend the majority of your waking hours at the office, whether in meetings, or chained to your desk, so by the time the weekend rolls around, the last thing you want is to spend even more time focused on all things work related. That's why the words "company retreat" are among the most dreaded and feared for hardworking individuals who want nothing more than a chance to escape the grind at the end of each week.

Of course, declining a company retreat is easier said than done. Typically, businesses that hold retreats give employees plenty of notice, so unless you really have a valid excuse, you'd better plan on attending. Still, your company retreat doesn't have to be torturous, and if you play your cards right, it can end up serving as a career-building opportunity. Here are a few tips to navigate your upcoming retreat -- and ideally make the best of it. 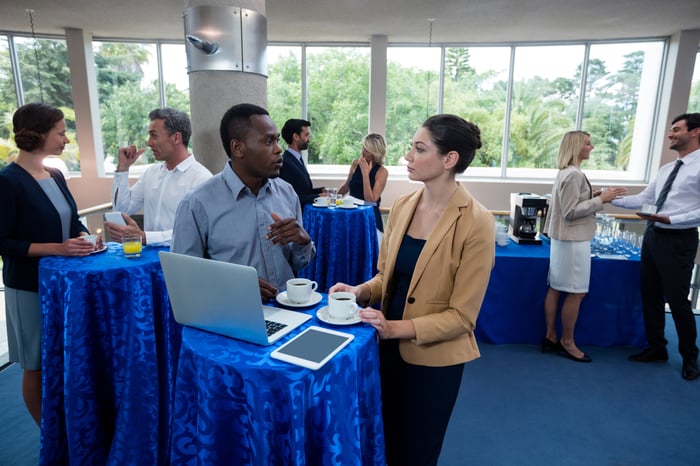 1. Know what you're getting into

Perhaps your retreat will be loaded with dull lectures and endless presentations designed to bore you and your fellow colleagues to tears. Or maybe your company has hired an engaging guest speaker and is offering amenities, like high-end food, to make that getaway more enjoyable. No matter the details, you'll be better off if you know what to expect in advance. If your employer doesn't provide an agenda ahead of time, ask for one so you can prepare mentally.

You may not want to spend your weekend stuck at a hotel with 200 associates you hardly know, but your company retreat can actually serve as a key networking opportunity. Rather than bemoan the situation, use it to mingle with folks in your company you normally don't get access to.

Better yet, make a list of the people you want to speak with ahead of time, and jot down some talking points so you're not struggling to make conversation on the spot. This is an especially helpful suggestion for introverts, who often loathe small talk -- not to mention company retreats, in general.

3. Take charge of an event or activity

From brainstorming sessions to trust exercises, your company retreat will likely feature a jam-packed schedule. And while you can't volunteer to run the whole thing, you can offer to lead a particular activity if you're worried about the way your management team will approach it.

Say you hear through the grapevine that your manager has a number of icebreakers in the works. Rather than subject yourself and your colleagues to an hour of corny introductions, offer to come up with your own exercises that'll make things a little less painful.

It's hard to establish relationships with coworkers when you're constantly pressed for time and up against deadlines at the office. The benefit of attending a company retreat is that you may get a real opportunity to get to know your coworkers better, and establish a certain level of trust that may have not previously existed. Having colleagues to lean on and vent to at work can make for a less stressful environment, so consider this your opportunity to make some much-needed office friends.

Though the idea of attending a company retreat might make you want to run for the hills, if you go in prepared and force yourself to maintain a positive attitude, you'll have an easier time getting through it. And remember, company retreats don't tend to happen more than once a year, so even if you don't end up enjoying yours, you won't have to go through it again for quite some time.