It's no secret that Americans are workaholics by nature. Not only are we bad about taking vacation days, but many of us consistently log on after-hours to deal with emergencies, check up on projects, or simply get ahead. Collectively, we're working harder today than in years past, and if we're not careful, that's going to cause us to burn out.

So how many hours does the typical American work per year? In 2015 (the last year for which this data is available), the average employee put in 38.7 hours a week and worked 46.8 weeks that year, according to a Pew analysis of Labor Department data. All told, this means that the average employed U.S. adult works 1,811.16 hours per year. 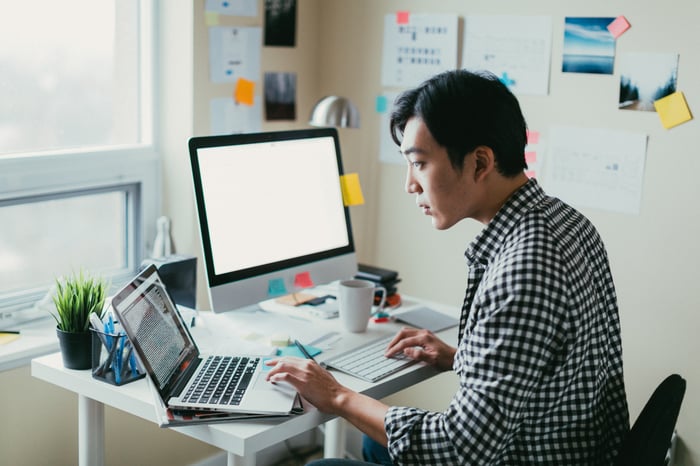 What's notable, however, is not just that number, but the uptick in working hours it represents. In 1980, the average worker clocked in 38.1 hours per week, which isn't that much below today's weekly average. However, back then, the typical worker only put in 43 weeks of work over the course of a year for an annual total of 1,638.3 hours. In other words, we're now spending roughly an extra 173 hours per year at our jobs in one way, shape, or form.

And that number doesn't even tell the whole story. Because an estimated 40% of U.S. employees regularly work more than 50 hours per week, and 20% work more than 60 hours per week, there are plenty of folks out there who might easily come close to hitting the 3,000-hour mark year after year (keeping in mind that these are the same people who are likely to forgo vacation time to meet deadlines and stay ahead of work-related obligations). And that could spell trouble not just for their physical health, but their productivity.

Clocking in too many hours at work can do more than just make you grumpy; it can actually make you worse at your job. It's estimated that 74% of working adults consistently don't get an adequate amount of sleep, and 66% of employees feel that their performance would improve if they had more time to get that much-needed rest.

Not only that, but according to a Stanford University study, there comes a point when working longer hours won't actually do you any good. Specifically, researchers noticed a decline in worker productivity once employees spent 50 hours on the job over the course of a single week. Furthermore, they found that productivity took a cliff dive after the 55-hour mark -- meaning, working 70 hours per week essentially produces the same results as working 55.

All of this leads to one glaring conclusion: It may be time for the collective workforce to reevaluate its habits and start making changes. This could mean cutting back our hours, taking the vacation time we're entitled to, and unplugging on weekends when we're supposed to be recharging. It could also mean making better use of the time we do spend at our desks so we don't wind up perpetually chained to them.

And there's work to be done from a management perspective, too. Rather than push employees to work as much as possible, those in charge would be wise to consider the merits of promoting a better work-life balance. For one thing, it might lead to employees who are less tired, less stressed, and more motivated. And, as we just learned, encouraging employees to limit their time spent in the office each week might actually lead to an increase in productivity -- in which case everybody comes out a winner.