It's said that quitting isn't an option, nor is it a positive trend to embrace. But actually, in some situations, quitting a job could be one of the smartest career moves you'll ever make. In fact, job quitting is apparently at a 15-year high, having topped the 5 million mark back in May. And it's actually a positive trend.

The reason? The fact that more people are quitting jobs means that they're finding better opportunities elsewhere. With that in mind, here are a few reasons you might consider quitting your job next year. 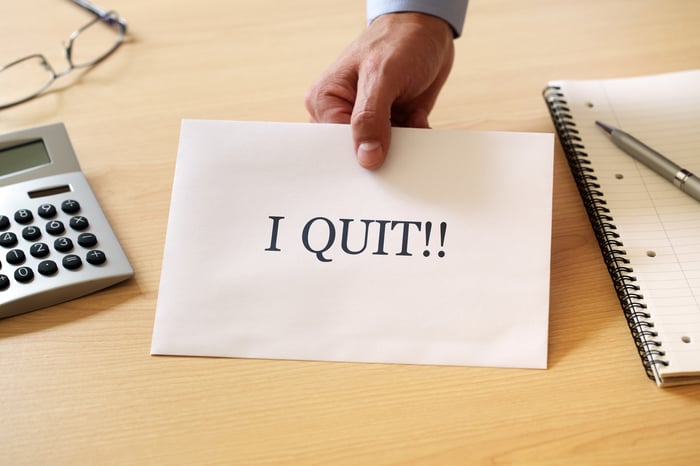 1. You know you can make more money elsewhere

While money shouldn't be the only factor dictating where you work or what job opportunities you pursue, it's a big one nonetheless. If you know that you're being underpaid at your company, or that there's no chance of getting a raise, then it makes sense to leave your current role and sink some time into finding a better-paying job elsewhere.

If you're going to go this route, you'll need to really do your research to confirm that your salary isn't up to snuff. You'll also need to put out some feelers to see what other opportunities might quickly become available to you upon leaving your present job. But if you're convinced there's more money to be made at another company, you shouldn't hesitate to go after it.

We all experience our share of uninteresting assignments and projects at our jobs. But if you come to find that you're constantly bored at work, then it's time to pursue a different opportunity -- especially if your company isn't open to giving you a promotion, or even supporting a lateral move. The more bored you get on the job, the more your performance is likely to suffer -- at which point, you might start slacking off, wrecking your reputation, and creating a situation where the decision to leave no longer becomes yours. And frankly, you're better off quitting before things get that bad.

3. There's no room for upward mobility at your company

It's one thing to have to pay your dues and work your way up toward a better role. But if your company truly doesn't offer any growth opportunity -- say it's a smaller firm where the high-level positions are filled by lifers -- then the last thing you want to do is resign yourself to a dead-end job. The longer you stay in the same exact role, the more frustrated you're likely to grow, so it pays to pick up and leave well before reaching that point.

4. You want to work for yourself

If you're eager to join the ranks of workers who are lucky enough to be self-employed, you'll be in good company. Freelancers now make up 35% of the total workforce, and there are several benefits to going this route.

For one thing, you'll get to call the shots, as opposed to having a boss to answer to. You'll also get the opportunity to take on assignments that are interesting, or meaningful, to you, as opposed to having no choice but to say yes to whatever tasks get thrown your way. There are also certain tax benefits that come with being self-employed that could save you money in the long run. If you're tired of working for somebody else, and think you have what it takes to thrive as a freelancer, then that's reason enough to quit your job in favor of more independence.

No matter why you ultimately choose to leave your job in the coming year, be sure to resign professionally. This means giving your employer a minimum of two weeks' notice, and offering to help train a replacement so that your company isn't left in the lurch. You never know when you might need a reference from your old boss, or even your old job back, so if you're going to quit, do so in a manner that doesn't put your career at risk.