Each year, countless workers will inevitably find themselves competing against one another for a promotion. But what happens when you're that one person who doesn't actually want a title change, but rather, is pressured into accepting one?

It happens more often than you'd think, but if you don't take steps to speak up for yourself, you could easily end up going from content to downright miserable on the job. Here's how to handle this seemingly enviable, yet delicate, situation. 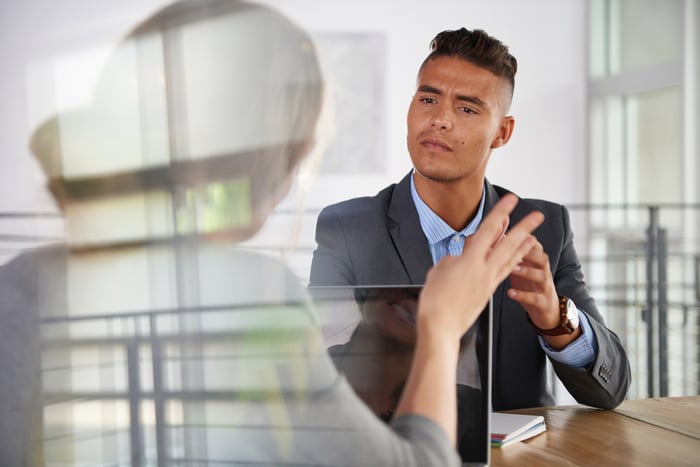 1. Get your facts straight

Before you can reasonably turn down a promotion, you'll need to get a good sense of what the title change actually means. Say you're going from marketing associate to marketing manager. Depending on where you work, this could simply mean being responsible for overseeing projects as opposed to just contributing to them. Or it could mean actually having to manage people, which may not be your cup of tea.

Either way, before you say no off the bat, sit down with your boss, or whoever's pushing you to accept that new role, and learn about the ins and outs of the job. That way, you'll have an easier time building a case for declining.

For example, say that as part of your promotion, you'll be responsible for making weekly presentations to company higher-ups. If that's something you really don't enjoy, or you feel isn't your strong suit, you can explain that you're wary of accepting a position you may not be equipped to handle, or that entails a task you typically try to avoid. And that'll send a much stronger message than your basic "thanks, but no thanks."

Getting promoted often means getting to do less hands-on work and more managerial work -- think HR reports, meetings, and the like. If that sounds loathsome to you, then it never hurts to remind your boss that your skills -- which are unique to your current role -- are what make you a valuable company asset, and that by pushing you into a promotion, the business will actually lose out.

Here's an example. Say you're an expert in software-interface development, and that in your current role, you get to spend most of your days improving upon an existing product and expertly fixing bugs that pop up. If your company tries pushing you into a management role, you can explain that, while they can easily find someone else to manage an IT team, they're unlikely to find someone with your in-depth knowledge of the product in question. In other words, convince your company that, by taking you away from your current tasks, it'll end up doing itself a disservice.

3. When all else fails, ask for some recourse

If, despite your best efforts, you're unable to talk your way out of a promotion, ask your company to agree to periodic evaluations in which you all reassess the situation. It may very well come to be that you're not as miserable in your promotion as you expected, but if that's not the case, you should also be granted a reasonable out. If you accept that promotion with the caveat that you want the option to go back to your former role six months down the line if it's not working out, and your company agrees to those terms, you're taking on much less risk.

Finally, keep the following in mind: Some people resist promotions because they're not big on change, but you never know when a title shift -- even one you're practically bullied into -- will end up working out in your favor. While it absolutely pays to push back if you're being pressured into a promotion you don't want, aim to approach it with an open mind if you end up in that role, nonetheless. With any luck, things will work out for the best, one way or another.