Please ensure Javascript is enabled for purposes of website accessibility
Log In Help Join The Motley Fool
Free Article Join Over 1 Million Premium Members And Get More In-Depth Stock Guidance and Research
By Maurie Backman - Feb 13, 2018 at 8:51AM

Interested in an alternative to full-time work? Here's some data to help guide your next move.

In recent years, it's become pretty clear that the gig economy -- a model under which folks work independently, as opposed to being employed full-time -- has really taken off. Gig workers make up roughly one-third of the workforce, and that number is likely to climb in the coming years.

Of course, as is the case with full-time work, the freelance lifestyle has its pros and cons. If you're interested in swapping a traditional work arrangement for one that's more flexible, here are some interesting data points about the gig economy to consider, courtesy of Prudential. 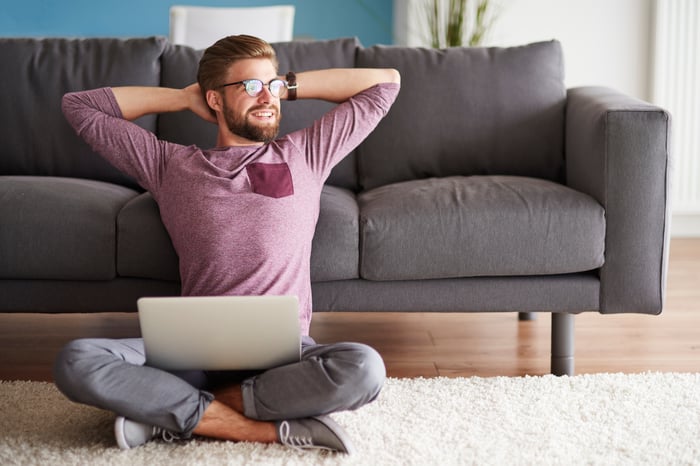 Though gig workers get the opportunity to set their own hours and schedules, that leeway comes at a price. It's estimated that gig workers earn considerably less than their full-time counterparts. Specifically, Prudential found that gig workers bring home $36,500 per year, on average, versus $62,700 for full-time employees.

Then again, gig workers tend to put in less time on the job as compared to full-timers, working a median of 25 hours a week. Full-time workers, meanwhile, typically clock in 40 hours per week or more, and often without any sort of overtime pay to soften the blow. It's no wonder, then, that so many freelancers enjoy a better work-life balance.

Countless workers across the board struggle to set aside funds for the future. But gig workers seem to have a sizable disadvantage in this regard, as only 16% have money in an employer-sponsored plan (perhaps from a previous job), as opposed to 52% of full-timers. Of course, there are plenty of retirement savings options for freelancers that don't rely on employers, but one major benefit of 401(k)s and the like is that most companies that sponsor them also offer free matching dollars to employees who contribute. Gig workers, by contrast, must typically fund their retirement entirely on their own.

Countless Americans feel less than secure about their finances, and gig workers are no exception. Only 50% think they're in a good place financially, which isn't the most encouraging ratio. That said, just 59% of full-time workers feel secure in their financial standing, which tells us that being permanently employed doesn't necessarily lead to less money-related anxiety.

5. Gig workers are generally happy with their choice

Despite the challenges gig workers face, most are happy with the career path they've chosen. Only 19% expressed a strong interest in moving over to a traditional work arrangement, whereas 32% of full-time workers said they'd like to give the gig economy a try.

Clearly, there are plenty of good reasons to join the gig economy if you're tired of the constraints associated with full-time employment. That said, if you're going to hop aboard the freelance bandwagon, go in with a financial plan. Have plenty of emergency savings to compensate for the fact that your income, at least at first, may not be all that steady, and network extensively prior to leaving your full-time role to line up some potential work in advance.

Furthermore, you'll need to reexamine your budget once you go from a steady paycheck to an income that's less reliable. This could mean cutting expenses to allow for a drop in earnings. Finally, be sure not to neglect your retirement savings after making the transition. As stated above, there are plenty of tax-advantaged savings plans available to freelancers, and funding one consistently is the key to being able to retire on schedule.

Then again, if you come to be truly happy as a gig worker, you may not feel the need to retire fully at all. Nearly one-third of gig workers are baby boomers, and of those, 75% report that they're extremely satisfied with their work situation. In other words, if you get into a good flow workwise, you just might buy yourself the opportunity to do what you love for as long as you wish.