These days, a growing number of companies are offering employees flexible work arrangements, with the ability to work from home being a popular subset. If you've never worked from home before, you might have certain ideas in your head about what it will actually be like. But if you buy into some of the common myths about working from home, you could be in for a pretty big shock once you adopt that arrangement yourself. Here are a few widespread misconceptions you shouldn't believe.

You may have heard that folks who work from home don't put in as much effort as those who commute to an office. After all, when you don't share a physical workspace with your boss, it's much easier to slack off and spend time on tasks that aren't work-related. 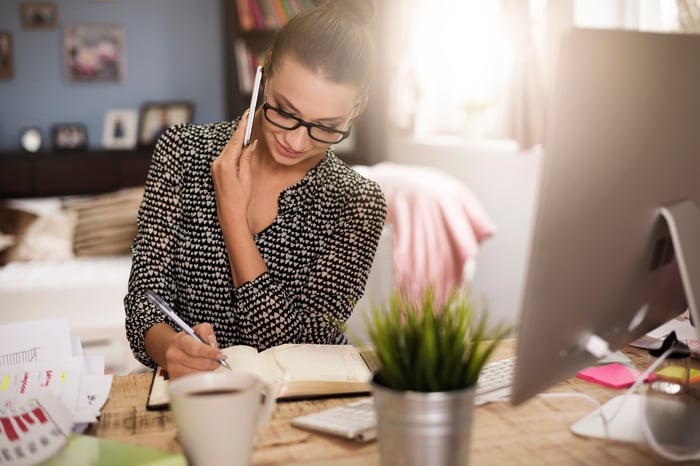 The thing to remember about working from home, though, is that technically speaking, you're always at work. As such, you may come to find that you put in more hours once you move over to that arrangement than you did when you reported to an office. And if you think you'll get away with goofing off, think again. You're still going to be held to the same standard as far as your performance goes, and if your boss notices your productivity wane, you can bet on having that work-from-home privilege revoked. And that right there is motivation enough to keep doing a good job.

2. You'll miss out on personal interactions

You may have been told that working from home is isolating, and to a certain extent, that's true. But with the ease of video conferencing today, you may be surprised at how much face time you end up getting with your colleagues.

Furthermore, many remote workers do a good job of developing and maintaining relationships over email alone. If you're willing to put a little extra effort into keeping up with your colleagues, you may come to find that you don't feel excluded from the rest of the team, and that you're not so lonely during the workweek after all.

Some folks will tell you that working from home is a bad move career-wise, because it sends the message that you're not interested in making the effort to show up at an office. Not so. In many cases, working from home can help your career by allowing you to maximize your waking hours and helping you spend more time on the job.

Imagine you used to drive 45 minutes each way to work. That's 90 minutes a day during which you can't check your email, work on presentations, or research your various assignments. If not having that commute allows you to reinvest those free hours into the job, your performance might improve, thus increasing your chances of getting a promotion or raise.

4. Working from home is the best arrangement out there

Many people who work from home love doing so -- but it's not the right setup for everyone. If you're the type who tends to get lonely and enjoys collaborating with others, a work-from-home arrangement may not be ideal for you. There are other drawbacks to consider, too, so before you decide to work from home on a full-time basis, give it a trial run and see if you actually like it. You may be surprised to realize that you actually prefer to go into an office after all.

Working from home can be a money- and time-saver, so it's an arrangement worth pursuing. Just don't make the mistake of buying into these common misconceptions until you try it yourself.