After weeks of interviews, you finally managed to snag an offer for what you thought was your dream job. Only it doesn't seem like your dream job now that you're deep in the throes of it.

If you're wondering whether you made the wrong choice about accepting a role, you're not alone. CareerBuilder reports than a whopping 66% of workers have said yes to a job offer, only to realize later on that it was a truly bad fit.

So, how do you know if you've landed in the wrong job? Here are a few telltale signs. 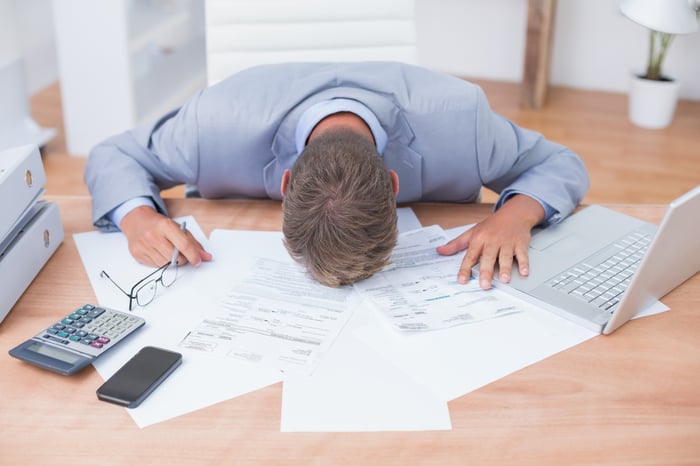 To expect constant stimulation on the job is downright unrealistic. Most roles come with menial, mind-numbing administrative tasks that we all have to power through. But if you find that you're bored at work more often than not, it's a sign that you took the wrong position. Maybe you were overqualified for the role at hand. Or perhaps the position was misrepresented. Either way, start dusting off that resume, because it's time to get out.

2. You aren't learning anything

Most jobs come with a certain set of requirements that candidates must meet to be considered. In other words, unless you're seeking an entry-level role, you'll need to come in knowing your stuff. That said, your job should also serve as a perpetual learning opportunity for you, and if that's not happening, you may want to take your business elsewhere. Not learning on the job is a sign that you've somehow managed to land in a dead-end role, and that's an easy way to needlessly stunt your career growth.

If you're a mid-level contributor who tends to mingle with upper management, there's a good chance the opinions of those with more tenure tend to carry the most weight. But that doesn't mean you shouldn't get a voice at your company, too. If you find that your ideas are constantly being shot down, and that you're just not being taken seriously, it's a sign that you need to leave.

4. Your day-to-day role doesn't match the description of the job you wanted

Usually, there's a reason we apply to certain jobs over others. Maybe you wanted an opportunity to work on high-level projects and compile data in large quantities. But if, once hired, you find that you're doing none of that, you should strongly consider moving on, especially if your boss doesn't take steps to get you closer to where you thought you'd be. Mispresenting a job description is something countless employers are guilty of, whether they do so intentionally or not. But that doesn't mean you don't deserve to be doing the things you thought you were signing up for.

How to escape a bad job situation

Maybe, at this point, you're convinced that you did, indeed, take the wrong job. The question is: What should you do about it? If you've only been there for a few weeks or months, leaving that quickly might damage your reputation and serve as a black mark on your resume. But if you attempt to stick out a situation that's unlikely to improve, you'll only prolong your misery.

The solution? If you don't have an exceptionally strong history of job-hopping, give your two weeks' notice, and chalk it up as a mistake. We all make them. Will you need to explain your very brief stint to your next prospective employer? Yes. But at that point, you simply state the facts: You realized early on that you took the wrong job, and you thought it would be best for everyone involved to curb a situation that clearly wasn't working. With any luck, the companies you talk to next will appreciate your honesty and pragmatism, and you'll quickly land a role you don't come to regret.

Did You Take the Wrong Job? Here's How to Know @themotleyfool #stocks Next Article
Current