Please ensure Javascript is enabled for purposes of website accessibility
Log In Help Join The Motley Fool
Free Article Join Over 1 Million Premium Members And Get More In-Depth Stock Guidance and Research
By Maurie Backman - May 31, 2018 at 8:03AM

There are no hard and fast rules when it comes to emojis, but here are some basic guidelines to follow.

These days, email is a well-established means of on-the-job communication. In fact, workers typically spend one-third of their time at the office reading and answering emails.

When you're sending emails for job-related purposes, your goal should be to keep your messages as polished as possible. This means avoiding things like grammatical errors, spelling mistakes, and incoherent thoughts. But does it also mean steering clear of emojis?

Endearing as those little smiley faces might be, it's hard to argue the fact that they can easily make you look unprofessional. On the other hand, emojis have become so commonplace that they've grown to be pretty much harmless. Should we therefore rethink that automatic ban on emojis in a work context? 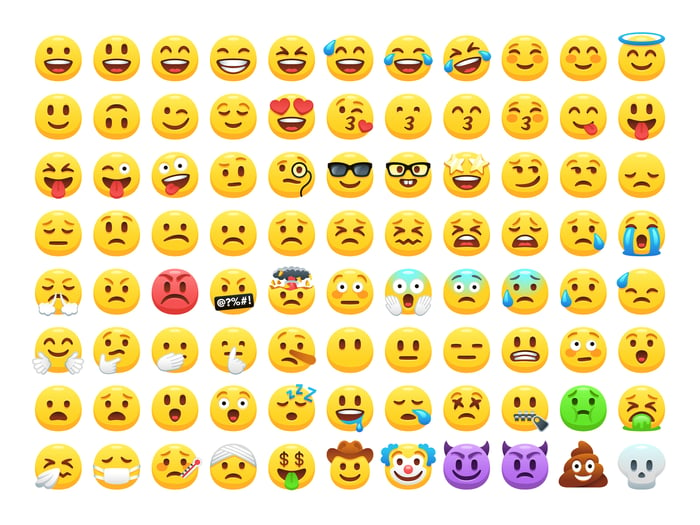 Should we all just stick to text?

Though emojis are innocent enough in theory, inserting too many in your work emails can make you seem unpolished. And according to an OfficeTeam Survey, 39% of senior managers feel it's unprofessional to use emojis in work-related communications.

But before we issue a blanket veto on emojis at the office, let's take a step back and remember that email does a poor job of conveying tone. It's often the case that an email meant as a light suggestion comes across as harsh criticism even if that's not the sender's intention. Emojis, however, can soften what might otherwise seem like blunt or aggressive communication.

Here's an example. Imagine you asked a colleague to provide data for a project by a certain deadline which has already passed. You're eager to have that information but aren't angry you haven't received it. You might send an email saying: "Just following up on that missing data. Please advise." But the recipient, knowing he's behind, might take that to mean you're annoyed. Stick a cute smiley face at the end of that message, and suddenly, that softens the tone significantly.

Still, there's a more professional way to achieve the same goal, and it's to choose your words more carefully. For example, you might try: "Just following up on that missing data. Please advise when you have a minute." Those extra words at the end of the second sentence automatically lighten the mood.

The bottom line on emojis at work

If you're emailing people with whom you have a solid relationship, like your peers or even your manager, there's probably no harm in utilizing the occasional emoji. But make a point to never use emojis when emailing upper management, outside clients, or people you don't know very well.

Also, take cues from others. If most people in your company like to use emojis in non-critical communication, there's no harm in following suit. At the same time, if you don't need to use emojis to convey a point, don't. If you're clearly sharing positive news, like "Client X just renewed a two-year contract," there's really no need to follow that up with a smile.

Finally, if you are going to use emojis, stick to the simplest ones, like your basic smile or frown. Otherwise, they can be tricky to interpret, and the last thing you want is to find yourself being called to an HR meeting because you used an emoji that a colleague took the wrong way.