Maurie Backman, Jason Hall, and Daniel B. Kline
(TMFBookNerd)
Author Bio
Maurie Backman is a personal finance writer who's passionate about educating others. Her goal is to make financial topics interesting (because they often aren't) and she believes that a healthy dose of sarcasm never hurt anyone. In her somewhat limited spare time, she enjoys playing in nature, watching hockey, and curling up with a good book.

In the course of our careers, we've bound to make mistakes we come to bemoan after the fact. Maybe you didn't fight hard enough for that promotion, or let your coworkers walk all over you for months on end. Here are a few of the things my colleagues and I regret the most in our careers. With any luck, you'll learn from our mistakes and avoid falling into a similar trap.

1. Not being willing to move for work

Daniel B. Kline: As a Motley Fool contributing writer, I've been lucky enough to appear on our Industry Focus podcasts fairly often. That scratches an itch that my own fears kept me from pursuing in my younger days. 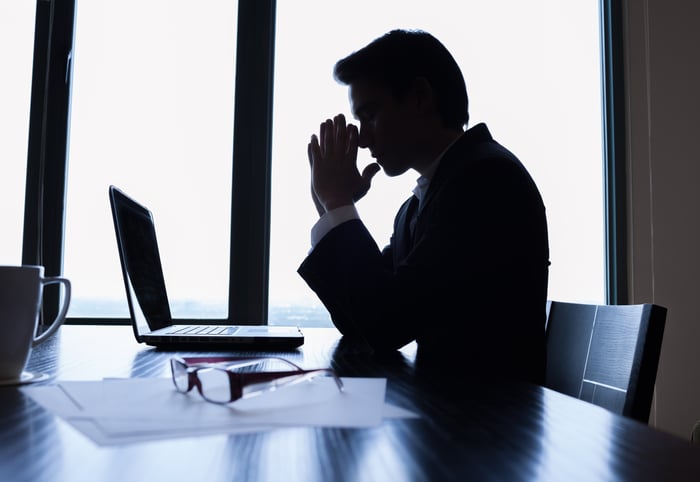 I wanted to be on the radio and even went to one of those short-term broadcast schools to learn what to do. Realistically, I could have been hired to do news updates and maybe host weekend talk shows, except I would've had to move to get one of those jobs.

At the time, I lived in the New York City area, and that market doesn't have many openings for inexperienced personalities. I had some interest in my tape from, to put it kindly, smaller markets. In most cases, the jobs being bandied about included sales or promotions work in addition to hosting or news duties. That didn't scare me, but leaving my comfort zone did, so I never took my shot.

Maybe I never would have progressed, and maybe I would have been one of those hosts who lasted a year or two before moving on to the next market. It's also possible I would not have enjoyed the work as much as expected. But I know it was fear that kept me from ever finding out. At this point, I'm happy with my career, but I also have a family, which means I have less flexibility to uproot my life if an opportunity does arise.

2. Not speaking up about an abusive boss

Jason Hall: This is a sensitive topic, and not easy for many people to discuss. Yet it's easily the biggest regret I have in my quarter-century in the working world, and something that, particularly in light of the "me too" movement, I know I should have done something about.

When I was in my early 20s, I picked up a summer job delivering phone books (remember those?) for extra cash. The supervisor I worked for was a predator. The last week of the job, he made several passes at me, which I rebuffed. But that didn't stop him. Without going into detail, his methods became physical, and I had to use force to restrain him on two separate occasions. I ended up walking out of the job after the second incident.

Here are my two regrets: First, I didn't deal with what happened to me. It caused problems in my relationships, it affected my self-confidence, and it took much longer for me to address the psychological impact than it should have. Second, by not reporting this predator to the phone company and the contractor he worked for, I didn't do anything to stop him from victimizing someone else. And since his job was to spend a few weeks in each area, supervising temporary workers, he almost certainly had many other victims.

By remaining silent, I not only caused additional harm to myself by not getting the help I needed, but I also didn't do anything to stop a predator. I regret the latter far more.

3. Not quitting a bad job sooner

Maurie Backman: My first job out of college was a stressful one at a hedge fund, and while I learned a lot from it and built some pretty solid skills, I was utterly miserable pretty much from the start. I forced myself to stick it out, however, because the pay was pretty good and I was worried I wouldn't find another job that offered the same salary and bonus structure. But I stayed on board way too long.

Rather than leave after two years, or three years, I forced myself to stay with the firm for nearly five years. By the time I submitted my resignation letter, I was completely burned out and in a pretty bad place because of it.

Not only did staying at a bad job too long cause me undue anguish and stress, but it also caused me to hold off even longer on doing what I really wanted to do. If you're stuck in a job that makes you unhappy, by all means, have an exit strategy before you quit. But figure out a game plan to put an end to your misery as quickly as possible. Otherwise, you might come to regret it down the line.