Many employees strive to work efficiently but struggle to do so. And given the ease at which employees can get distracted, it's not surprising to learn that workers waste up to three hours per eight-hour shift. If you're looking to improve your employees' productivity, the answer may lie in a more flexible work arrangement -- specifically, letting your team work from home.

At first glance, you might assume that working from home would have the opposite effect. After all, when employees work from home, they're surrounded by household tasks begging to be done and televisions that can be watched during working hours without their bosses being any the wiser. Similarly, there's nothing to stop folks who work from home from taking extended lunch breaks or cutting out early when they feel they've had enough. 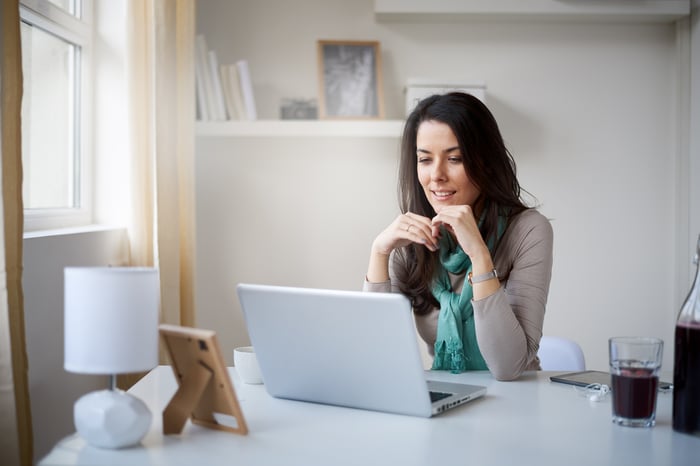 But new data from FlexJobs tells us that working from home, can, in fact, play a role in improving workers' output. In a recent survey, 65% of workers said they'd be more productive, not less, working from home as compared to a traditional office environment. And that's reason enough to consider letting your employees telecommute.

How working from home helps productivity

Will working from home really help your employees do better at their jobs? It just might. In the aforementioned survey, 75% of respondents said that working from home would help eliminate the distractions that are par for the course in an office environment. And 74% said that having fewer interruptions from colleagues would help them focus on key tasks and power through them.

Then there's commuting to consider. Folks with a miserable trip to and from the office stand to lose out on work time by rotting in traffic, and the stress associated with a bad commute can easily impact their frame of mind, making it harder to focus once they're actually at their desks. Reducing that stress would therefore be instrumental in improving productivity, or so said 71% of those surveyed by FlexJobs.

Finally, 65% of workers said that being allowed to do their jobs from home would reduce the extent to which they get tangled up in office politics. And that's helpful from not only a productivity standpoint, but a happiness perspective as well.

If your team has been suffering on the productivity front, it's time to consider letting employees work from home, at least on a trial basis. Of course, this doesn't mean you have to dive in at full force. Start by giving your strongest performers the option to work from home on a partial basis, and slowly offer up that benefit across the board if you find that it works.

At the same time, don't hesitate to make it clear that working from home is a privilege, and one that can be revoked if you find that your employees aren't pulling their weight. Along these lines, establish clear expectations under your proposed work-from-home arrangement. If you want your workers to be available for conference calls, meetings, and the like during certain hours, let that be known. Working from home doesn't mean setting one's own schedule, so be specific about what you're looking for.

Of course, if you do come to find that allowing employees to work from home does nothing to improve your team's productivity, then you should certainly feel free to revert to your old model. But chances are, your workers will be so appreciative of that flexibility that they'll strive to do better, which means you'll ultimately get the results you're after one way or another.