As 2018 slowly but surely nears its close, a large number of workers will no doubt find themselves vying for a raise at work. But rather than fixate on salary alone, you might instead want to focus your efforts on fighting for better benefits.

The average raise for 2019 is projected to be 3.1%. Meanwhile, the average American's salary is $46,641 a year, which means that the typical worker is looking at a $1,446 boost. Now that's not a small chunk of money. But check out the following benefits, which might pay off better financially. 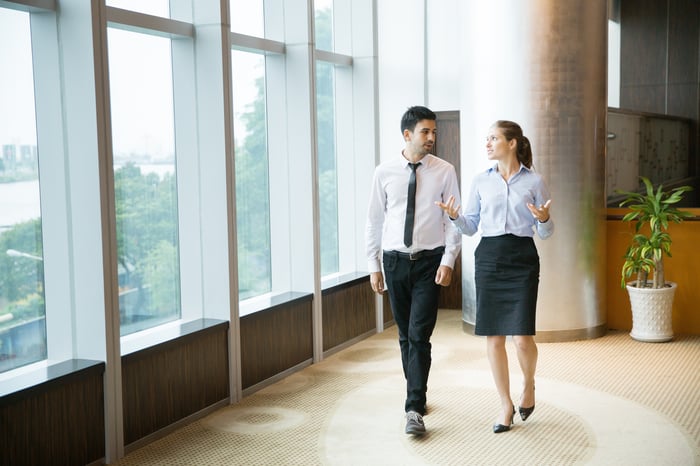 Some companies that offer health insurance to employees require their workers to pay part of their premium costs. Others, meanwhile, cover those premiums in full. If your employer isn't particularly generous on the raise front, it pays to argue for a better health insurance subsidy instead.

The average annual premium for single coverage (meaning, coverage just for yourself) is $6,896 this year, of which workers contribute an average of $1,186. If your company changes its policy so that you're no longer forced to pay into your premiums, you stand to bank that $1,186, which gets you close to what the average raise will amount to next year.

Meanwhile, the average annual premium for family health coverage is $19,616 this year, of which workers contribute an average of $5,547. If your company decides to fully subsidize your family coverage instead of a raise, you'll come out way ahead financially than you would with a $1,446 increase.

Extra vacation time won't put more money in your pocket directly, but it might pay off financially another way -- provided you're willing to work a side hustle. If you have a lucrative second gig but limited time to dedicate to it (you know, because of that full-time job you also hold down), having extra time off could make you richer by allowing you to ramp up on that additional work, thereby boosting your overall income.

Imagine you manage to snag a side hustle that pays you $50 an hour. If your company gives you five extra vacation days next year, and you're willing to spend them working, you could, conceivably, bring home an extra $2,000 (assuming you put in 40 hours over the course of those five days). And that's better than the $1,446 the average worker can look forward to.

If you're in the habit of buying coffee, snacks, and lunches during the workday, gaining access to free food and drink at the office could save you a bundle. Imagine you typically spend $3 a day on coffee and another $10 a day on lunch. If your employer starts providing those items free of charge, you'll cut your expenses by $3,250 over the course of a 50-week period. And that amount of savings is enough to trump the typical raise.

Most companies that sponsor 401(k) plans also match employee contributions to some extent. If your company's match is particularly generous, it could amount to more than the typical raise. Imagine your employer is willing to offer a match next year equal to 6% of your salary. This means that if you're an average earner, you're potentially looking at about $2,800 in free money (provided you contribute that much yourself), which is about double what the average raise for the upcoming year looks like.

There's nothing wrong with fighting for a raise going into 2019. At the same time, don't spin your wheels fighting for a modest boost that your company is hesitant to dish out when the potential for better benefits is still on the table. In many cases, you're apt to find that a single improvement in that regard will help your financial outlook much more than a 3.1% salary bump.