Desperate for a job out of college? These are things you shouldn't settle for.

There's little more daunting than the idea of graduating college (with a mountain of student debt, no less) and not having a job lined up. As such, you may be tempted to graciously accept the first job offer that comes your way post-graduation, even if it isn't your ideal role.

Now let's be clear: There's nothing wrong with taking a position that isn't exactly your dream job. When you're brand-new to the workforce, sometimes, you do need to settle to a certain degree. That said, there are certain warning signs that should drive you to reject a job offer, even if you don't have another one on the table. Here are a few to be aware of. 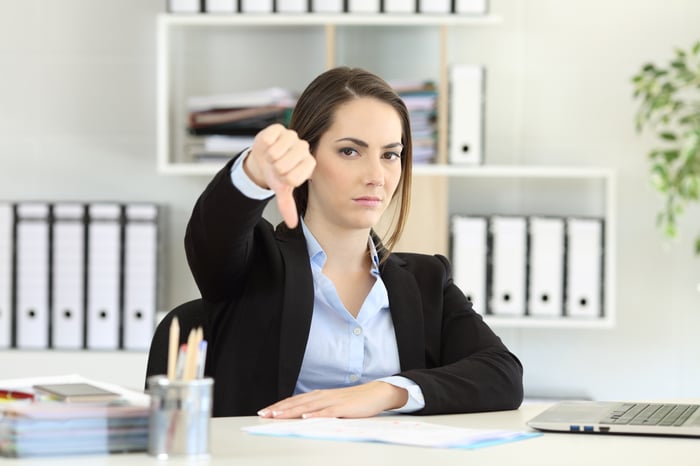 1. The company culture isn't a fit

A company that doesn't foster teamwork, creativity, and open-mindedness is probably the wrong company for you. If you're offered a job by a company whose culture rubs you the wrong way, or whose values don't align with yours, then it's a sure sign that the role in question is one you should pass up.

2. The salary is considerably lower than what you deserve

You can't necessarily expect to graduate college and snag a job with a six-figure income -- but that doesn't mean you shouldn't go after a salary that'll enable you to pay your bills and enjoy a comfortable lifestyle. Before you even begin your job search, research what you're worth based on the roles you're applying to, and then make sure the numbers you're presented with are reasonable in light of your research. If they're totally off-base, consider it a sign to say no.

3. The job in no way relates to what you actually want to do

It's one thing to pay your dues right out of college by taking a job that involves tasks you'd rather not deal with, such as administrative or clerical duties. But there's a difference between taking on some menial labor and taking a job that in no way correlates to the career path you've chosen for yourself. Enticing as it may be to snag a steady paycheck sooner rather than later, if you're hoping to work in advertising, accepting a job as an entry-level data clerk at an accounting firm isn't going to bring you closer to that goal.

4. The company's reviews are horrendous

There's nothing more telling about what it's like to work for a company than to read employee reviews. And if the general sentiment is that the company that's offered you a job is a miserable place to work, that's reason enough to not take a job there. It's silly to think that your experience will be remarkably different if the things you're hearing are overwhelmingly negative.

When you're desperate to get hired somewhere, it's easy to convince yourself that a not-so-ideal job will work out just fine. Doing so, however, could be a move you'll quickly regret. Rather than let that happen, keep these warning signs in mind, and don't force yourself to accept a role that will ultimately leave you unhappy.