Please ensure Javascript is enabled for purposes of website accessibility
Log In Help Join The Motley Fool
Free Article Join Over 1 Million Premium Members And Get More In-Depth Stock Guidance and Research
By Daniel B. Kline – Updated Aug 8, 2019 at 12:38PM

It's not easy, but it's possible.

Before you can go after a dream job, you have to consider whether your dream is realistic. If you're not already on a path to be shortstop for the Boston Red Sox or an astronaut, it's likely that no combination of hard work, networking, and even luck will help you land one of those positions.

However, if you have somewhat attainable goals -- perhaps you want to work in the baseball or aerospace industries -- then it's certainly possible to achieve your dreams. But possible doesn't always mean easy, and getting where you want to go will take planning, hard work, and, maybe, a little luck. 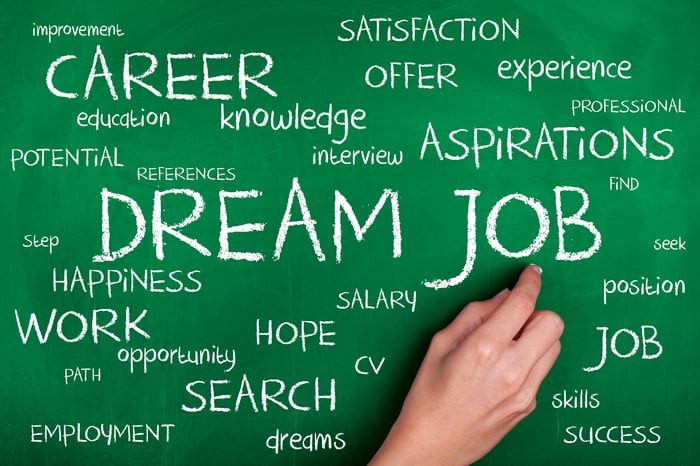 It's possible to land a dream job but you have to put the work in. Image source: Getty Images.

You may not follow the exact same path others have taken to land your dream job, but it's important to know what the traditional route is. It's also smart to know what skills or qualifications are non-negotiable. For example, if you need a certain degree to land the job, you'll want to know that so you can go get it.

2. Get your resume right

If you need a certain degree, that's not something you can accomplish quickly though it can be done. The same thing is true of work experience. If 99% of people in the job you hope to land have sales or management experience then you should work to make sure you have that box checked off on your resume.

Sometimes a single casual acquaintance can be enough to help you make the connection that changes your life. Don't leave having those connections to chance. Network both in real life at industry events or conferences and on social media including LinkedIn. Make an effort to meet people in the field you want to work in and don't be shy about sharing your goals.

People generally like to be the hero. They want to help someone and if they can do that by passing on your name or making an introduction for you, they generally will.

I knew in college, maybe high school, that I wanted to be a writer in some form. To make that happen, I wrote whenever I could (college newspaper, the humor magazine, and even the yearbook). In addition, I actively pursued work at various publications, which led to my first real job at a magazine proofreading an annual directory.

It was tedious work making sure the forms a company filled out matched what was entered. Doing that work, however, led to a part-time job writing news items for magazines and television news shows produced at trade shows.

None of it was glamorous, but it led to my first full-time writing and editing job. That eventually led to my current position as a writer and podcast contributor for The Motley Fool. I'd consider myself as having achieved my dreams (though I did not know exactly what I wanted when I was in college) but it was not a short journey.

You have to do the work

It took me roughly 18 working years to land where I am now. I was a working writer for much of that and held a few "dream" jobs along way, but it took a long time to land the life I wanted.

What's important is getting started and enjoying the journey. Put it in the work and you should eventually get there but if you dream without action you likely won't.