Please ensure Javascript is enabled for purposes of website accessibility
Log In Help Join The Motley Fool
Free Article Join Over 1 Million Premium Members And Get More In-Depth Stock Guidance and Research
By Maurie Backman - Mar 11, 2020 at 7:54AM

Now's not the time to make it difficult for employees to miss work because of illness.

If the coronavirus outbreak is teaching us one thing, it's that social distancing is perhaps the most effective tool in limiting the spread of germs. That holds true not just in terms of novel viruses like COVID-19, but in terms of everyday cold and flu viruses. Yet a shocking number of Americans don't get paid sick leave through work and, as such, risk not only harming their own health during this latest crisis but putting others in jeopardy as well.

The importance of paid sick time

An estimated 32 million workers are not entitled to paid sick days, according to the Bureau of Labor Statistics. Among lower earners, 70% are without sick time. That makes for a very dangerous situation in scenarios like the one we're currently in.

In the past number of weeks, a large number of employers have instituted work-from-home policies in an effort to limit or reduce the likelihood of COVID-19 transmission. At the same time, public health officials have been urging Americans to stay home and/or seek medical care if they're feeling sick -- particularly those displaying COVID-19 symptoms like cough, fever, and shortness of breath. 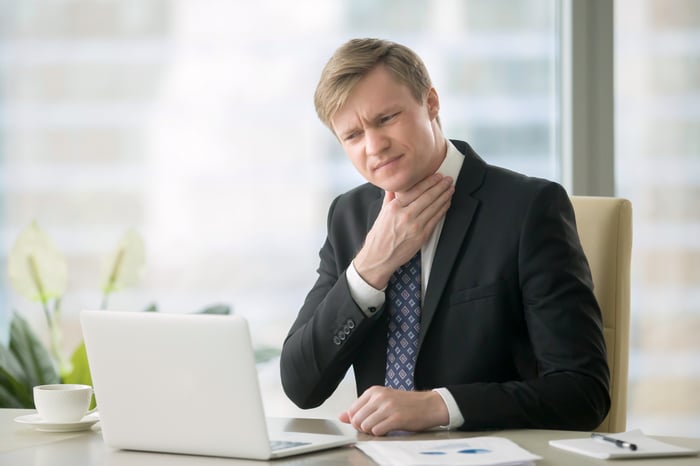 That puts employees without sick time in a tough spot, to say the least. Those who comply and miss work lose their paychecks and risk falling behind on bills. Those who go to work with mild illness -- which is what the new coronavirus is said to inflict in roughly 80% of those infected with it -- get to continue earning money, but risk infecting others.

It's for this reason that employers, especially now, need to step up and start making accommodations for those workers who can't afford to take time off from work due to illness, but need to do so as a public safety measure. In fact, some legislators recently proposed that companies be required to give workers 14 days of paid sick leave during public health emergencies like the one the country is currently grappling with. Currently, there's no federal law mandating sick leave, though in 12 states and Washington, D.C., it's required to some degree.

But in reality, it shouldn't just be a public health crisis that renders workers eligible for sick days. The flu, for example, can be extremely dangerous in vulnerable people with weakened immune systems or pre-existing conditions, and so anyone displaying symptoms of that virus should be granted the same leeway to stay home. The same holds true for any illness considered serious enough to impact others, whether it's a no-name virus or one that's widely known.

By offering paid sick days, employers do their part to not only keep their workers healthy, but also, limit disruptions. Imagine a single employee shows up to work and infects 20 colleagues. Suddenly, instead of one person being out for a week, 20 people are down for the count, resulting in a huge decline in output.

In other words, offering paid sick time isn't just the morally responsible thing to do; it's a financially responsible move as well. And the sooner more companies recognize that, the greater our chances of limiting the damage from COVID-19 and any other virus that threatens the health of the public.