An improving jobs market means fewer college enrollees for DeVry. But the company is looking to grow in other ways.

What: Shares of for-profit higher- and professional-education company DeVry Education Group Inc (NYSE:ATGE) are down more than 13.7% at 12:40 p.m. EDT on May 25, following the company's announcement on May 24 that its CEO was leaving, a new CEO had been appointed, and it was making an acquisition. At the same time, a ton of class-action lawsuit press releases are also filling up DeVry newsfeeds in recent days.

So what: DeVry announced on May 24 that longtime CEO Daniel Hamburger was leaving the company to "pursue other opportunities," and that Lisa Wardell, a member of DeVry's board of directors since 2008, had been named new CEO.

The company also issued a press release announcing that its Becker Professional Education subsidiary was acquiring ACAMS -- the Association of Certified Anti-Money Laundering Specialists -- for $330 million. This acquisition is part of the company's strategy to expand its offerings beyond traditional higher education, and to serve more professionals in multiple industries.

DeVry has also been dealing with a lawsuit filed by the Federal Trade Commission in January, accusing the company of deceptive advertising, and allegedly inaccurate job placement data about its graduates. The company is "vigorously defending itself" against the charges, but over the past several days, a number of press releases by law firms filing class actions against DeVry have shown up in the news.

Now what: Considering the abrupt CEO change, the overhang of the FTC lawsuit, and a generally bad environment for the for-profit education industry, the spate of class actions shouldn't be a surprise. The reality is, anytime a company's stock price has fallen as sharply as DeVry's has over the past several years, it's inevitable that law firms which specialize in this kind of litigation will come out of the woodwork. 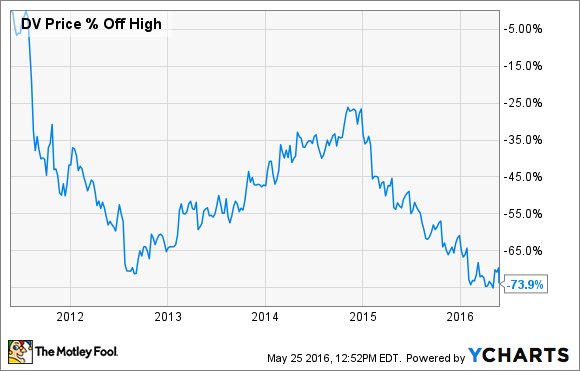 This is particularly true when there's a lawsuit brought by a federal agency in the mix.

But here's what matters the most for investors: DeVry, like most of its for-profit brethren, faces a relatively challenging macro environment in the U.S. A growing domestic economy and a strengthening jobs market don't bode well for growth in enrollment, so DeVry must continue to find growth in other places, while also managing its costs at home. In the most recent earnings report, DeVry demonstrated that it was doing just that, with relatively strong earnings last quarter after adjusting for one-time restructuring costs.

The company's expansion into South America seems to be paying dividends, and there's a good chance that growing its professional education platforms -- as the ACAMS acquisition will do -- will help diversify the company, based on changing trends in educational demand.

That's not to say that DeVry is out of the woods. The abrupt departure of its CEO and the still-pending FTC litigation bear watching closely. But with a forward price-to-earnings multiple in the high single digits, DeVry stock could be a decent risk-reward investment even today -- if you are willing to stomach the uncertainty around the FTC lawsuit, and think a new (and first-time) CEO will be able to navigate the company through this changing environment.