Fewer students are only one of DeVry's current challenges.

What: Shares of DeVry Education Group Inc. (NYSE:ATGE) are down 13.2% at 2 p.m. EDT on June 2, following the announcement that CFO Timothy Wiggins would be leaving the company at the end of the month and would be replaced by Patrick Unzicker, who has been vice president, treasurer, and chief accounting officer at the for-profit educator.

So what: Another executive leaving the company after last week's surprise departure of longtime CEO Daniel Hamburger isn't reassuring, considering the legal challenges the company is facing, to go along with what has become a very weak environment for the entire for-profit education industry. Wall Street analysts seem to agree, with Credit Suisse lowering its rating on DeVry's stock, and cutting its target price from $25 to $17.

Now what: Uncertainty is Mister Market's arch nemesis, and there's nothing like seemingly sudden big changes in the executive suite, along with potential legal problems -- a la DeVry's current battle with the FTC -- to send a company's stock tumbling: 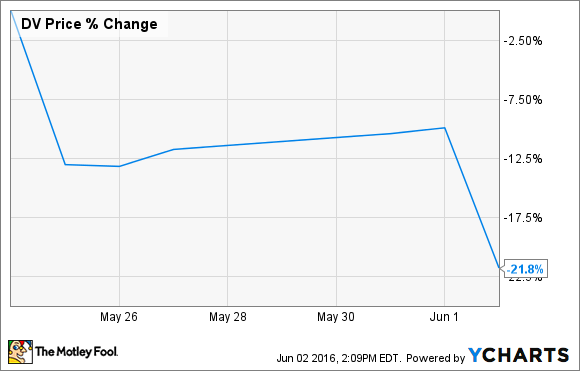 Factor in what many are calling an ill-advised, expensive acquisition last week -- the company paid $330 million for a $40 million revenue business; that's eight times sales -- and all of a sudden there's a lot of uncertainty around the company's direction.

The good news? Both the new CEO (multiyear board member) and the new CFO (longtime executive at DeVry) are experienced and familiar with the company, so it's not like the reins have been handed over to complete strangers. However, it's clear that there's been discord in the leadership ranks, with so much change so quickly.

Putting together the sudden and major changes in top leadership with the uncertainty around the FTC case, and what looks like a questionable investment that could mean less-than-stellar capital allocation plans going forward: it's probably best to stay on the sidelines until some of the dust clears, we have a better idea of how this management team plans to move the business forward, and we know the outcome of the FTC case.