Please ensure Javascript is enabled for purposes of website accessibility
Log In Help Join The Motley Fool
Free Article Join Over 1 Million Premium Members And Get More In-Depth Stock Guidance and Research
By John Maxfield - May 28, 2016 at 10:28AM

How the bank performs on the upcoming stress tests next month will filter through to its share price.

Shares of Bank of America (BAC 1.38%) are waiting for an opportunity to head higher, trading as they do for 40% less than the bank's book value. But what will trigger their ascent?

Multiple factors will play into the performance of Bank of America's stock over the months and years ahead, but one in particular is rapidly approaching. It concerns the upcoming stress tests which the nation's biggest banks must pass in order to return more capital to shareholders.

The stress tests are typically held in March, though the results this year are due in June. Their purpose is to determine whether banks with $50 billion or more in assets on their balance sheets will be able to survive a severely adverse economic scenario akin to the financial crisis.

Banks that make it through the Federal Reserve-administered gauntlet can raise their dividends or boost share buybacks. Banks that are tripped up by the process, however, must typically wait another 12 months before they're given permission to return more capital to shareholders.

A bank's performance on the stress tests filters through to its stock price. According to research by Merrill Lynch, which is a subsidiary of Bank of America, banks that passed the last four tests saw their shares increase both leading up to the tests and following release of the results. Banks that ran into trouble, alternatively, saw their shares fall after results became known.

"[W]e believe investors remain highly focused on the outcome of the stress tests and a strong capital return plan could signal that a bank feels comfortable with its regulatory position," wrote Merrill Lynch's Erika Najarian. "We expect those banks with high capital payouts or significant improvements in capital return to outperform."

Bank of America doesn't qualify as a bank with a high capital payout, though it could see one of the most significant improvements in capital return this year. Both follow from the fact that the nation's second biggest bank by assets has only been allowed to raise its dividend once since the crisis in 2008. In all other years, either it has not asked for permission to do so, or its request has been denied by regulators.

You can see in the chart below how this distinguishes Bank of America from JPMorgan Chase (JPM 1.28%) and Wells Fargo (WFC 1.92%), the first and third biggest banks by assets in America, respectively. 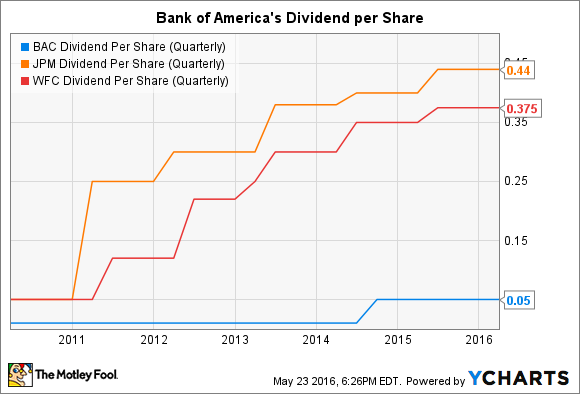 The net result is that Bank of America's current dividend payout ratio, which measures the percentage of net income distributed via dividends, is only 16%, according to Yahoo! Finance. That's less than half of many of its peers. Wells Fargo's payout ratio, for example, is 37%, while JPMorgan Chase's is 30%.

The silver lining to Bank of America's otherwise disappointing payout ratio is that there's only one direction for it to go: up. JPMorgan Chase, Wells Fargo, and others will probably get approval to boost their quarterly payouts per share, but few have as much room to improve as Bank of America. It's for this reason that the upcoming stress test could serve as a potent and positive catalyst for the stock of the $2.2 trillion bank.