With less expensive and more personalized streaming options growing in audio, the satellite radio provider had appeared to face the same threat as the cable companies. But so far, the audio market has shaped up much differently. The satellite radio company has grown subscribers by 50% since 2011, when it had just more than 20 million. And those gains have come despite price hikes.

Today, Sirius XM is adding customers faster than any other time since Sirius and XM merged in 2007. And that growth does not appear to be slowing anytime soon. Last month, the company raised its new subscriber guidance for the year from 1.4 million to 1.6 million

This isn't a cable-TV cost structure

From a business standpoint, the everything-in-one bundle makes sense for Sirius XM in a way that it doesn't for cable providers.

Unlike cable TV companies, whose programming costs for each channel rise with each new subscriber added, Sirius can grow subscribers and add new channels without necessarily increasing the costs to provide the programming.

In fact, while it's made those subscriber gains noted above, its programming and content costs have barely budged, rising less than 4% over the last four years.

That's delivered the company consistent growth in revenue while costs of programming and content have remained relatively flat. 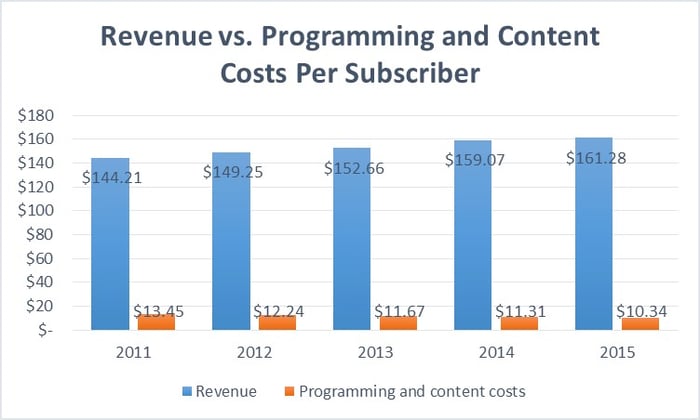 It should be noted here that Sirius XM's programming and content costs are only one part of the equation; they made up less than 10% of overall operating expenses last year. The company has seen its music royalties rise significantly over the past few years due to settlements with music labels. That helped push another important line item up by more than 50% over the past two years. It also has revenue-sharing agreements with automakers that leave it paying more as it brings in more revenue.

From a customer perspective, Sirius CEO Jim Meyer says the company has learned two important lessons over the years:

"And when you combine those together, we are really doing well," Meyer said.

The big bundle has been the best way to deliver in both of those areas. Investors should not underestimate the importance of ease of use to Sirius XM's success. This is another place where radio differs significantly from television. Much of our time spent listening to audio is in the car -- an estimated 70% -- where we want as little distraction as possible.

So, while cable TV subscriptions have been falling since at least 2012, subscription radio has proved to be more resilient. Advancements in technology could change this, however, so investors will want to stay dialed in to that conversation.

While TV content providers are looking to more specialized "skinny bundles" as an option to the big cable bundle, the smaller bundle doesn't make much sense for Sirius.

As Sirius execs have noted in discussions with analysts, it's also much easier to slice up a $150-a-month TV bundle into smaller, less expensive, and attractive packages than it would be to slice up a $15-a-month service.

More importantly, Sirius XM subscribers seem happy with the bigger bundle. It's working for customers and it's working for the company. Unless Sirius XM sees subscription growth wane or more subscribers canceling because of price, investors need not fret. The big bundle is here to stay for satellite radio.