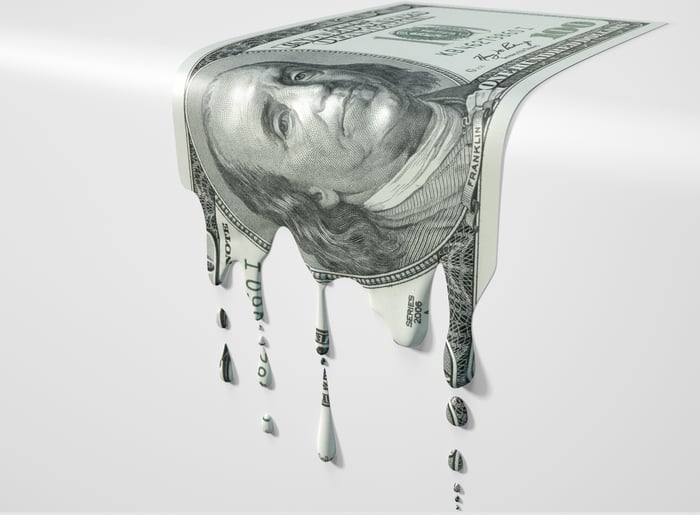 But as the old adage goes, "if it seems too good to be true, it probably is." That's the case with the three high-yielders discussed here, all of which are in danger of cutting their yields over the coming years. While I won't be able to dive into all the details here, the most salient dangers you need to be aware of are outlined below.

A clothing retailer that's fallen out of fashion

For a long time, Guess (NYSE:GES) was able to buck the trend in clothing retail. While competitors saw their comparable-store sales (comps) decline as customers eschewed the mall, Guess showed surprisingly resilient numbers. That trend, however, seems to be coming to an end.

Hurt somewhat by the strengthening dollar, the company saw comps dive 3.6% last year -- a trend that accelerated through the first quarter of 2016, with comps down by 4.2%. That's not a good sign for the company's stock, or its 5.7% dividend.

Over the last 12 months, Guess has been able to pocket only $50 million in free cash flow (FCF) -- a problem exacerbated by poor inventory management at the beginning of 2016. And yet, it has paid out over $77 million in dividends. It doesn't take a math whiz to see that this isn't sustainable.

While Guess does have a three-year recovery plan in place, investors need to wonder if cutting the dividend will be necessary to fund the initiatives management wants to put in place.

Covanta Holdings (NYSE:CVA) is in the business of burning up trash -- and generating energy in the process. It's a sustainable way to produce electricity while avoiding the buildup of landfills. When you throw in the fact that the company sports a 6% dividend yield, it's not hard to see why one might be tempted to buy shares of Covanta.

But a look under the hood at the company's balance sheet reveals some troubling trends. As recently as 2013, the company brought in $128 million in FCF -- more than enough to cover its dividend. But since then, a troubling trend has occurred: While the company's dividend payout has doubled in just two years' time, its FCF has disappeared -- it had negative FCF of $138 million over the last 12 months.

Part of this is because the company had higher maintenance costs than it usually does, which drove up capital expenditures. And as with any energy and materials company today, commodity prices have created a significant drain on results. But here's the problem: There's no telling when commodity prices will rebound.

If commodity prices remain low, I wouldn't be surprised to see Covanta make a dividend cut.

Will these acquisitions pay off for a rising telecom?

For a long time, Frontier Communications (OTC:FTR) was in a no-growth category, primarily offering landline telephony to rural U.S. customers. But times have changed. In 2014, the company bought AT&T's Connecticut operations, and over the past year, it has acquired Verizon's operations in California, Texas, and Florida.

That sounds promising, and it might lead you to believe that buying the company's 8% dividend is worth doing. But a look at the company's cash flow statements show that while it has paid out $648 million in dividends over the past 12 months, it only brought in a measly $49 million in FCF.

Acquisitions played a key role in this, and ensuring that they were worthwhile is the only way Frontier won't end up cutting its dividend. The problem is that the company botched several aspects of its rollout in Connecticut, and it was recently rated dead last for customer service among Internet Service Providers (ISPs). If those trends don't change, customers will leave in droves, and a dividend cut will likely soon follow.

Are any of these cuts for sure? Absolutely not, but now you should have enough background information to make up your own mind about buying these stocks.